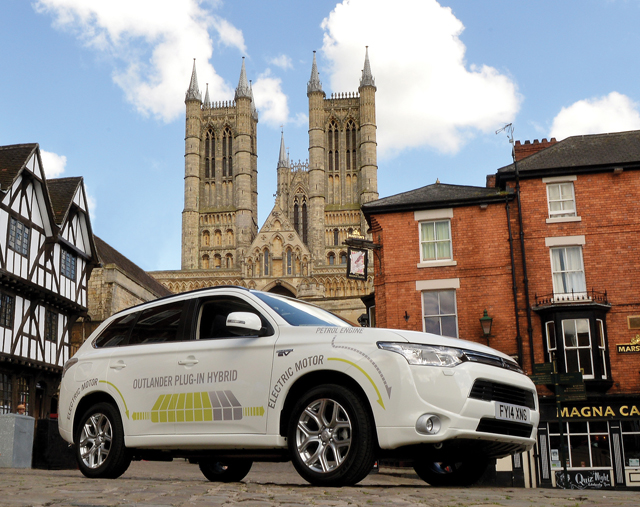 If there is a sport utility vehicle (SUV) that might change the way we think about electric and hybrid cars, it is Mitsubishi’s Outlander Plug-in Hybrid Electric Vehicle (PHEV).
It’s a no-nonsense family motor that doesn’t cost a bomb and possesses a valuable electric-only resource.

Being able to charge it up from your home wall outlet means trips to the petrol station should be few and far between, as long as your excursions are short ones.

And thanks to its 2.0 litre petrol engine, the PHEV can keep going long after the battery has exhausted its last trickle of electrical energy. This gives this Outlander the range-extension needed for lengthier trips. You could easily drive it between towns, using the petrol engine to keep things charged to the max.

I test drove the entry-level GX3h model, which means the car doesn’t have the top-spec GX4hs hide trim. Instead, it has a blend of cloth facings and imitation leather bolsters.

There’s no motorized fine tuning for either front seat but there is ample manual adjustment. Only the driver’s seat has height adjustment.

Regardless of the lack of some of the classier elements of kit on the flagship GX4hs, the basic PHEV’s cabin does have an excellent feel to it. There’s a respectable soft-plastic dash top and the same substance is used on the topmost area of the door trims. The car also comes with a leather-sheathed multi-function steering wheel which is height-and-reach adjustable but is also spot on in size and feel.

The front seats are comfy and well cushioned and indeed, for a medium-size SUV, head, shoulder and legroom are top-notch. The cool, calm and collected ride adds to the sense of on-road wellbeing.

With the rear seats in use, there’s 463 litres of load space. When folded flat, this rises to a whopping 888 litres. Other storage space features include a sizeable glove box, cup-holders, front-and-rear door pockets, open side-bins in the rear cargo area and under-floor room in the boot too. The rear seat backs also have a 60/40 split for additional load flexibility.

Behind the wheel, the PHEV’s straightforward driveability is a nice surprise. If you want, you can simply put the SUV in ‘drive’ and travel around as you would in any traditional petrol or diesel automatic.

There is an abundance of technical information on the cabin’s central screen to let you know exactly what’s happening so far as battery power, charge and fuel expenditure are concerned.

At cruising motorway speeds, the PHEV is happy to run on voltage velocity alone. Then, as the battery supply falls, you can top up via a switchable mode at the centre console. This hooks up the engine to either juice up the batteries, assist by driving the front wheels, or both.

From a standing start, it’s quite on the ball. When driving smoothly away from the lights, it has that unusual turn of low down pull that electric motors present. If you want to put your foot down for a quick getaway, the combustion engine kicks in, and, though there’s a bit of a grumble from up front, the united effort of petrol power and electric drive on the front and rear wheels gives the Outlander PHEV a potent, almost V6-like, character.

Off the tarmac, ground clearance can sometimes be a bit of an issue, but the fresh and different Mitsubishi copes and handles things well on the whole. Whether or not the PHEV is in electric-only or petrol/electric guise, it’s always in four-wheel drive. There’s also an all-wheel-drive lock that’s made to work via the touch of a button.

For its green, yet powerful and grippy talents, Mitsubishi’s well screwed together Outlander PHEV is one that a lot of British families will warm to.