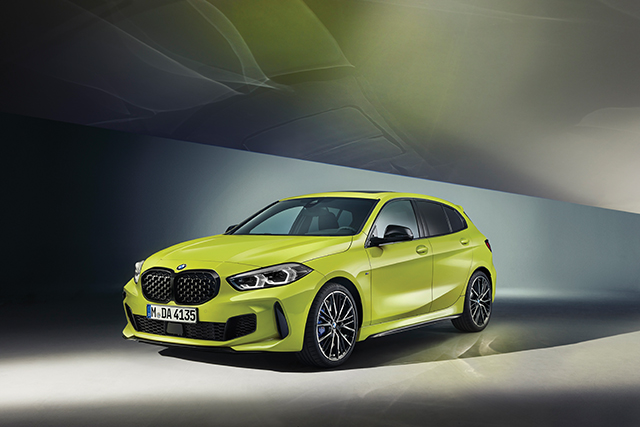 Retuned springs and dampers, precise tweaks to the chassis and an optimised soundtrack turn the BMW M premium compact model’s performance up another notch.

This latest raft of modifications reinforces the commitment of the BMW M135i xDrive to delivering BMW’s hallmark driving pleasure. Its chassis technology combines with the engine’s extremely sporty performance characteristics and BMW xDrive intelligent all-wheel drive to create a flawlessly composed overall package for a richly engaging drive. The compact BMW M model comes as standard with near-actuator wheel slip limitation integrated into the engine control unit. The resultant shortening of the signal paths allows traction to be controlled up to ten times faster than with conventional systems when pulling away, on slippery surfaces and during dynamic cornering. The BMW M135i xDrive additionally benefits from a mechanical limited-slip differential at the front axle.

Dramatic acoustic experience in the cabin
The twin-tailpipe exhaust system facilitates power delivery from the engine with its reduced backpressure, while also producing a characterful acoustic accompaniment. The distinctive, emotion-stirring sound is also transmitted into the interior, where it is carefully amplified through the audio system’s speakers.

The revised soundtrack conveys the signature four-cylinder engine note of a BMW M model to those on board more authentically than ever. The instant response to every movement of the accelerator is translated into corresponding acoustic signals. From the powerful building of torque under acceleration through to the drop-off in load on the overrun, the power unit’s operating state is clearly discernible at all times. Starting the engine prompts a sound composition specially created for this model, adding another facet to the rich acoustic experience inside the car.

New paint finishes for a high-impact look
A new selection of particularly striking paint finishes has been introduced to accompany the performance enhancements and underscore the individual character of the BMW M135i xDrive. BMW Individual paint finishes and special customer requests can also now be incorporated into the manufacturing process at BMW Group Plant Leipzig, where the compact model is built. The special colours require additional servicing and technical support work, with an increased number of manual processes. To cater for this, an existing paint shop was modified and the number of employees working there increased by ten.