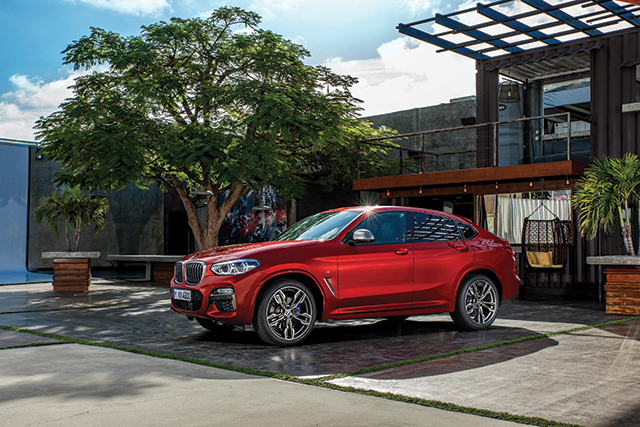 The second generation of one of the world’s most recognisable Sports Activity Coupés.
It brings together the hallmark features of a BMW X model with the sporting elegance of a coupé – a formula that saw its predecessor achieve over 200,000 global sales since its debut in 2014. The new X4 gains enhanced driving dynamics, standout exterior design with a strong coupé silhouette and even more refinement, along with state-of-the-art driver assistance systems and connectivity.

The range is also enhanced by the addition of two new M Performance models – the BMW X4 M40i and M40d – to further underscore the high performance of the vehicle and cater to customer tastes.

The all-new BMW X4 is 81mm longer than its predecessor, with 54mm added to the wheelbase and 37mm extra width. It is also lower by 3mm. All of these elements come together to give it dynamically stretched proportions that emphasise its perfect 50:50 weight distribution and hint at the enhanced performance potential.

The side profile is marked out by a sweeping shoulder line, with clearly defined haunches and distinctive wheel arches, while the lean coupé roofline is enhanced by a smoothly rising sill line and an elongated take on the Hofmeister kink ‘counter-swing’ at the base of the C-pillars.

Clearly structured surfaces and horizontal lines shape the car’s tail. The L-shaped LED rear lights, with their three-dimensional housing, are slim in design and positioned at the extreme edges of the rear. Together with the twin exhaust tailpipes (shared by all engine variants), they magnify the width of the rear end.