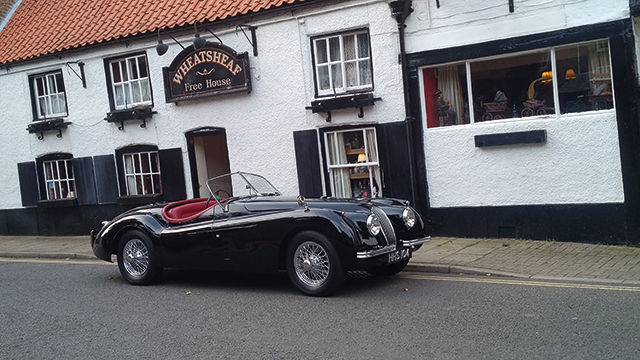 Woldside Classic and Sports Car in Louth is the place to be this autumn if you love Jaguars.
The classic car showroom opened last year, when the owners of Thompson and Smith in Louth realised their collection of classic cars was overwhelming their regular car showroom. The building adjacent to their site become available and it was converted into a heated showroom, bodyshop and restoration facility.

Since then business has been booming and there has been a succession of beautiful cars passing through the doors, from the sublime 1965 Ferrari GT 2+2 Series 1 to the once ubiquitous 1984 Ford Fiesta Mk 2 Ghia. Currently the crowning glory of the collection is the 1954 Jaguar XK120 SE OTS 3.4 Manual right hand drive, finished in flawless glossy black.

Launched at the London Motor Show in 1948, the XK120 was Jaguar’s first sports car produced after the war and was the first car to be fitted with the new 6 cylinder XK engine. The first few cars were handmade in aluminium until demand increased and a pressed steel body was utilised from 1950; however the aluminium bonnet, boot and doors were kept. When launched, the XK120 was the world’s fastest production car, capable of 120mph.

During its life cycle the XK120 was offered in three different bodies. From launch the OTS roadster (open two seater) was offered, then, in 1951 the FHC (fixed head coupe) was launched and the DHC (drop head coupe) followed in 1953 – the XK140 replaced the XK120 in 1954. From 1951 an SE version (Special Equipment) was available offering a more powerful engine, uprated suspension, factory fitted wire wheels and distinguished by a twin exhaust pipe.

The car was manufactured as an SE (Special Equipment) model in 1953 and was first registered in Scotland in 1954. The Jaguar Daimler Heritage certificate is present with the car and shows the matching engine numbers are of the higher performance and that the car retains its original black coachwork, although the original grey trim has been replaced with striking red. Subject to a five-year-plus restoration, completed in 2009, by the previous owner of almost forty years, this car can only be described as stunning and of the highest standard. The wire wheels, standard on the SE, are fitted with quality Vredestein radial tyres and are all in as new condition.

The car has some beneficial upgrades to make it a super tourer – Coopercraft front disc brakes with four pot calipers are fitted for safety, the suspension has an upgraded anti-roll bar at the front and the rear shock absorbers have been changed from the lever arm type to telescopic units. Under the bonnet, an alternator has been fitted as has a Kenlowe fan and the cooling system is further enhanced with the addition of Evans waterless coolant. A bespoke stainless steel six branch exhaust system with twin tailpipes has also been added.

Underneath, it is easy to see the standard of care taken during the restoration of this car – everything looks new! The chassis was removed from the body and carefully blasted and treated, all suspension and drivetrain components have been fully restored and there is not a spot of rust anywhere due to the underbody treatment applied.

On the road the car behaves impeccably. The engine runs perfectly and pulls strong through the four speed manual gearbox, the steering is dead straight ahead and although heavy works well, the brakes are strong and the car handles well with not the slightest of suspension noise.

Of course there are plenty more exquisite cars in the showroom at Woldside Classic and Sports Car which you can browse online at www.woldsideclassics.co.uk. Most of the cars include a short video presentation so you can see them in action on the road. Alternatively call into their showroom on Tattershall Way, Fairfield Industrial Estate, Louth, LN11 0YZ or call 01507 606725.