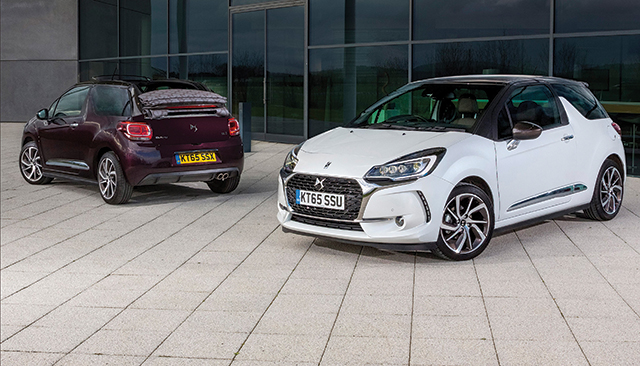 The latest DS 3 was revealed amongst much splendour in Paris at the beginning of the year, but we couldn’t drive it. It was a ‘static’ unveiling only.
It looked fantastic – outside and in – but the new DS 3 press drive happened closer to home, in London. And there was still an element of glamour. The DS buzz was focused around the Greenwich Peninsula – starting off at ‘Intercontinental London – The O2’, a recently built luxury hotel next door to the renowned O2 Arena.

2016’s DS 3 has been given a nip and tuck here and there, with the sharper nose being the most evident change. There is improved standard kit, as well. We drove the Puretech 130 hatchback in mid-range Prestige guise, priced at £18,795

The 1.2 litre turbo petrol power unit is lively and compliant. According to DS’ on-paper figures, the 130 will do 0-62mph in 8.9sec, but it feels quicker in the real world.

It pulls itself forward with enthusiasm between the 2000rpm and 5000rpm power band, with only a hint of turbo lag detectable. This interruption in delivery is so transitory, though, that it is far from inconvenient.

Step inside the DS 3’s cabin and you can’t miss the state-of-the-art central seven-inch touchscreen. The best thing about this is that it gets rid of many of the buttons. There are 20 less than the previous model.

This makes the centre console look far more orderly. The cabin comes with spoonfuls of style and there have been enhancements to materials. The seats, in particular, have a quality feel. The cabin plastics are, in the main, substantial, but the below the knee panels and the glovebox lid look like they might scuff easily over time.

Occupant-wise, this supermini will seat five-up. A six-foot-tall adult sitting behind another of similar height will find leg and headroom reduced, but room is substantial for this class of car, and the boot holds a respectable 285 litres, swelling to 980 with the rear seats folded down.

Emissions for the DS 3 Puretech 130 hatch run at 105g/km and it provides a combined mpg of 62.8. But when it comes to the new DS 3 hatch, engine choice is all down to the kind of life the French-manufactured car will have. Those with frequent commutes should go for the BlueHDi 120 diesel. This mixes civilised performance of 0-62mph in 9.4 seconds with a combined fuel economy of 78.5mpg and tax-foiling carbon dioxide emissions of only 94g/km. Lowest CO2 emissions come with the BlueHDI 100 S&S manual at 87g/km.

If you are tempted by the DS 3’s quality-brand values and dapper looks, the innovative Puretech 130 is a must-have choice. It houses an energetic engine that is enjoyable when you want it to be, and sits back on its haunches dutifully when you need a calmer pace.

With the personalisation options and a pick of both Cabrio and hatch body forms, the DS 3 is a hearty small car, full of high spirits.