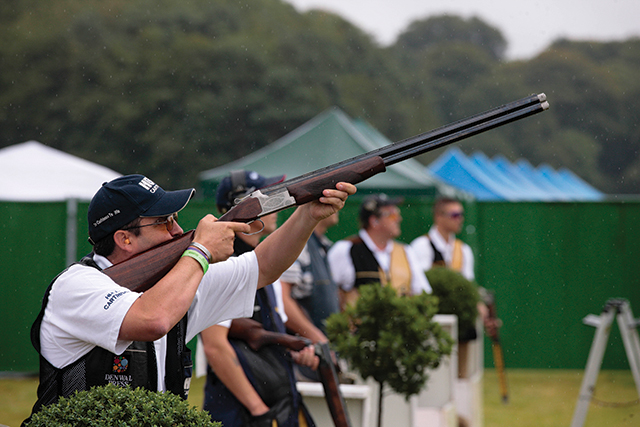 The Game Fair has more active shooters in attendance than any other event, but crucially it has more would-be shooters too.
Chris Ladd from Ladds Guns says that, “this combination uniquely provides a commercially active marketplace for the gun trade whilst introducing vital new blood for the industry. This is why we are so happy to support the event next year at Hatfield House,” something reflected in the show’s statistics: £80m spent at the show, up £10m from the previous year, and the CPSA and BASC facilitating thousands of beginner’s sessions on the shooting line.

Carl Russell of Carl Russell & Co, one of the earliest companies to commit to the 2019 event, points out another dimension of the audience make-up, commenting, “there is no comparable event for quality and scale” meaning trade for exceptionally high quality guns sitting comfortably alongside entry level and used firearms. “In event terms we are focusing solely on The Game Fair,” continued Carl. “With our business located on the estate, we have had glimpses of the new layout and exciting plans for the shooting line which I am convinced will resonate positively throughout the gun trade. We are already getting excited for the 2019 event.”

Other visionaries leading the way include Rigby, Longthorne Gunmakers and Holland & Holland. As participants in the recent Game Fair Pavilion in Doha, Elaine Stewart of Longthorne Gunmakers said: “The Game Fair has proven its value. With a marketing and communications campaign topping £1m, we are very confident of continued high footfall and a quality audience at the 2019 event.”

Daryl Greatrex, MD at Holland and Holland, echoed this sentiment: “The Game Fair has long been a highlight of Holland & Holland’s annual calendar. With our recent showcase in Doha, we can see only an exciting and expanding future for this British institution.”

Underlining the strategic importance of the event, Marc Newton, managing director of John Rigby & Co, commented: “Rigby is delighted to once again attend The Game Fair in 2019. The UK is an important market and The Game Fair is the biggest event for us in the country, so we’re delighted to confirm our attendance early, as we have lots of exciting news to share in the new year.”