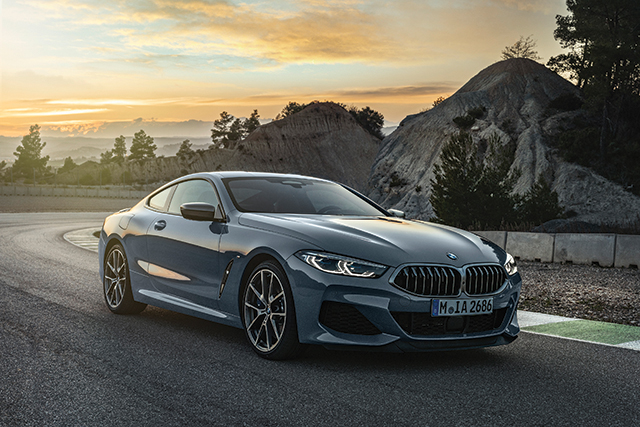 The new BMW 8 Series Coupé is the start of a new chapter in BMW’s long and illustrious history of making iconic and sensational sports cars.
With outstanding performance, emotion-stirring design, state-of-the-art luxury and advanced equipment technology, the BMW 8 Series is one of the most exciting new models to emerge in recent years. The car is beign built at BMW’s Dingolfing plant, which is also home to the BMW 7 Series Saloon – a plant with a fine track record in dynamic luxury motoring. The number ‘8’ in the model name stands for a high-ranking status within BMW’s product range. As in the past with the BMW Z8 and also with the current BMW i8, it is reserved for sporty cars that also fire the emotions. It’s a key component in the luxury segment model offensive set out by the BMW Group as part of its NUMBER ONE > NEXT strategy. As part of that strategy the primary development objective for the new BMW 8 Series was thrilling driving dynamics. Body, powertrain and suspension were consistently honed to achieve the best agility, precision and poise expected of a top-class sports car. In the process, remarkably powerful engines were combined with the BMW xDrive intelligent all-wheel-drive system and BMW EfficientLightweight design measures. To compound this sporting nature it was also developed alongside the BMW M8 GTE – which has already proven its potential in the FIA World Endurance Championship (WEC) long-distance races and in the IMSA WeatherTech SportsCar Championship (IWSC) held in North America.

The exterior design exudes sporting appeal, with a clear link to the BMW Concept 8 Series first unveiled at the Concorso d’Eleganza Villa d’Este in 2017. It shows a new styling language focusing on clarity, modernity and emotional engagement. The expressive design emphasises the character of the car with greater intensity than on any of the brand’s previous models.

Its low-slung design has an elongated silhouette with a slim window graphic and a roofline flowing elegantly into the powerfully shaped rear with distinctive ‘double-bubble’ contours. With exterior dimensions of 4,843mm in length, 1,902mm in width, 1,341mm in height and a wheelbase of 2,822mm, the two-door coupé has a powerful stance on the road.