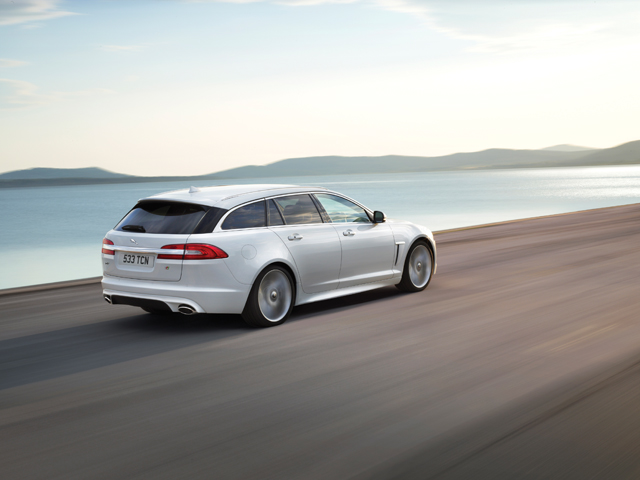 The new Jaguar XF Sportbrake made its public debut at the Geneva Motor Show and promises to be the most versatile Jaguar ever created.
Sharing its underpinnings with the XF Saloon, the Sportbrake’s overall length grows by just five millimetres, its weight by less than seventy kilograms and its chassis structure matches the strength of the conventional XF. These characteristics mean the Sportbrake can closely match the acclaimed handling of the XF Saloon, yet offers a large and highly practical load space.

Every panel on the XF Sportbrake, from the B-Pillar to the rear, is new. The strong silver signature line running the length of the car is extended while the C-Pillar is finished in gloss black, a trait shared with the XJ Saloon. Slim rear light units extend into a strong chrome crossmember that dominates the rear of the car. The result is a car that blends style and function with the rear seat occupants benefiting from forty-eight millimetres of extra rear headroom.

The large, practical tailgate can be specified with power struts, opening to reveal a wide and highly versatile load space. Measuring 550 litres with the rear seats up, the boot is framed by a set of useful cubby compartments. With the seats folded, the total volume grows to 1,675 litres.

Practical touches are prevalent – and standard equipment – on the XF Sportbrake. Remote fold levers are mounted within the boot area to lower the rear seats, negating the need to stretch into the boot. Powerful LEDs throw a pool of light onto the ground when the boot is open, while the tailgate itself features a soft close function, avoiding any requirement for it to be slammed. Set into the boot floor is a panel that splits into three sections, to allow smaller loads to be neatly wedged and avoiding a precious or fragile cargo being thrown about. A tray mounted under the boot floor also helps protect valuable items.

Beneath the car there are extensive changes to the rear suspension. Self-levelling air suspension aids driving dynamics and means the Sportbrake can serve as an accomplished tow vehicle.

Powering the XF Sportbrake will be a range of efficient yet powerful diesel engines in 2.2-litre four-cylinder and 3.0-litre six-cylinder form, each directing drive through the rear wheels via an advanced eight-speed automatic gearbox.

Prices for the XF Sportbrake are set to start at £31,940 on the road and the first deliveries will be made in the UK towards the end of the year.