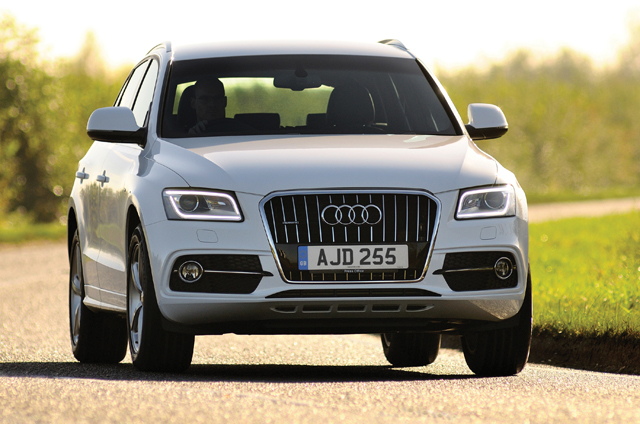 Words by:
Tim Barnes-Clay Featured in:
May 2014
Share Article

If I had over £35,000 I would happily buy the 2.0 TFSI quattro S line version of the Audi Q5.
You see, the styling of the Q5, with its coupe-like roof line and wrap-around tailgate, has been subtly refreshed. The design of the headlights has been changed, and the sparkling xenon units are now framed by new-look LED daytime running lights that form a continuous band surrounding more of the lens.

Inside, the Audi Q5 is pure understated refinement. The controls are trimmed in chrome, and the narrow panels of the centre console are finished in high-gloss black. The hi-tech central media component, MMI navigation plus, has very few buttons, so you don’t need a degree in Rocket Science to work out how to use it. Other touches such as heated seats, air-conditioning and a multifunction steering wheel make the Q5 a dream to drive.

The car is as solidly made as an oak table and yet seems as light as a feather. There’s a reason for this: the bonnet and tailgate are crafted from aluminium, while the car’s structural elements integrate ultra-high-strength steels; they reduce weight and improve crash safety. The result is that the Q5 handles like an executive saloon and takes off like a bat out of hell when you dab the accelerator. Indeed, the performance totally matches the looks of this Germanic road warrior: top speed is 138mph and the 0-62mph sprint is done in a satisfying 7.1 seconds.

Another explanation for this awesome performance is the updated Q5’s TFSI petrol engine, which combines direct fuel injection, while the eight-speed Tiptronic automatic powers the 2.0 TFSI quattro up the cogs effortlessly. The chassis of the latest Audi Q5 also adds a great deal of refinement and comfort, thanks to changes to the spring, shock absorber and anti-roll bar settings. The new power steering system gives you a better feel for the road too.

The Q5 driving experience is further enhanced when the optional Audi drive select system is specified. Audi drive select lets you vary the operating characteristics of the throttle pedal, the shift points of the automatic transmission, the degree of power steering assistance and the operation of the automatic air-conditioning system via four modes, including an efficiency mode. In addition, three optional components can also be controlled by the Audi drive select system if they are fitted. These include adaptive cruise control, damper control and dynamic steering. During higher speed cornering, it compensates for understeer and oversteer by intervening with slight steering pulses.

I’m not saying you’ll ever get too relaxed driving the Q5, but when you’ve had enough of all that commuting to work and driving the kids to school malarkey, the Audi will thrill you off road. It may look a bit bling but it actually performs well on rugged terrain. Its maximum climbing angle is 31 degrees and its approach and departure angles are each 25 degrees. And you won’t rip anything off the Q5’s underbelly because the vehicle’s ground clearance measures 20cm.

This is truly a motor for everyone – but you’ll have to have a decent bank balance, or a boss who’s nice enough to put this on the company car list to drive one.