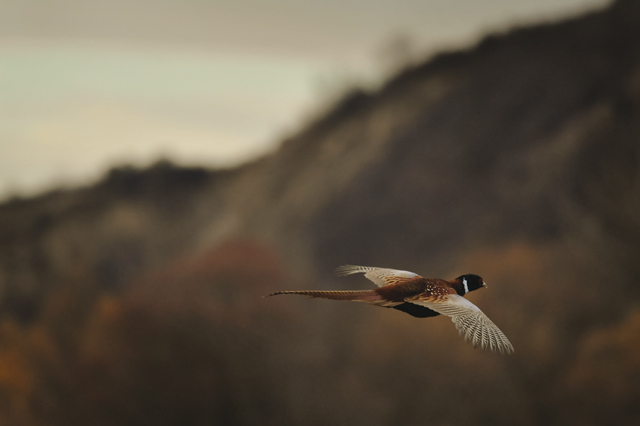 Mention Worlaby in shooting circles in Lincolnshire and beyond and everyone pays attention. This shoot has an enviable reputation, taking place on one of the premier sporting estates in the county. Those that have shot here speak of the beautiful terrain, the first-class organisation and above all the quality of the birds shown.
The rolling hills and the strategically sited cover crops provide a level of sporting shooting that brings guns back time after time. Owned by the Lamyman family for over sixty years, the current custodian is forty-two-year-old Tim Lamyman, who farms the land and runs the shoot ably assisted by head keeper Mick Chambers and under keeper, twenty-four-year-old Samantha Klug. Pheasants and ducks feature heavily in the bag but it is for partridges that this estate has earned its enviable reputation.

In the 1950s and ’60s Tim’s grandfather Leonard was one of a group of shooting farmers known locally as ‘The Big Six’ and widely recognised as some of the finest partridge shots in the country. One of the team was Sir Joseph Nickerson who would also be a frequent visitor to Worlaby. In those days the game was almost exclusively wild English partridges but as farming practices have changed and evolved so has the shooting to a point that, today, it is French partridges that are predominant over the guns – and wonderful sport they provide too.

Having been fortunate to shoot here, I can speak from first-hand experience of both the quality and the quantity that this shoot provides drive after drive. No guest ever goes away disappointed. Tim took over the running of things in 1992 and the shoot is run as a fully commercial enterprise on the 2,200 acres that make up the estate. Being commercial does not mean that traditional methods and practices have been sacrificed; in fact, nothing could be further from the truth as Tim is clearly passionate about shooting and his own shoot in particular.

Farming is still the mainstay of his business, however, and he takes it very seriously – so much so that this year he has broken the UK record for wheat with a yield of 14.31 tons per hectare; a huge achievement for which he is justly proud.

Talking to Tim, I asked him what he felt it was that made the Worlaby shoot such a success and without hesitation he said “great terrain, forward planning and my keeper Mick Chambers. Mick left school at the age of fifteen and came to work for my grandfather in 1957. He has stayed with us ever since; his knowledge of pheasant and partridge rearing is unsurpassed; this coupled with his ability to adapt to ever changing ways of doing things has made him an invaluable asset to the shoot. Now a sprightly seventy-one-year-old, he shows no sign of slowing down any time soon. Last year he received his fifty-five-year service award at the Lincolnshire Show and he still strives to be the best at what he does and is held in high esteem by all who know him.”

Shoot days start at the converted chapel in the centre of the estate. Built in 1870 and later purchased by the estate, it has been tastefully converted into the perfect meeting and lunch venue. Guests are warmly greeted over coffee before pegs are drawn and a safety briefing given before setting off in the shoot trailer for a series of drives.

After the second or third drive, a break will be taken in the field with the usual fare – that might be hot soup, pork pies, plum bread, cakes, as well as a shot of something to warm the insides such as sloe gin or cherry brandy. With a further couple of drives completed the guns make their way back to the chapel where a roast dinner is served with a glass of fine wine, allowing the guns to relax and recount the many highlights of the day before setting off for home; taking with them a brace of birds for the table, as well as a host of memories of their day at Worlaby.

I finished by asking Tim if he felt that there was still room for improvement and he said: “With over 100 acres of cover crops and thirty-five drives to choose from you would think not but things are constantly evolving and we are always looking at ways that we can tweak or move drives around to give us a bit more flexibility on a shoot day.”

Clearly Tim is not resting on his laurels and is looking to maintain the standard that his grandfather set so many years ago. I feel sure that future generations will look back and say Tim has done that.

If you would like to see your shoot profiled, whether it is big or small, private or commercial, or just a few friends mucking in together, tell me about it. Drop me a line at Lincolnshire Life, County House, 9 Checkpoint Court, Sadler Road, LN6 3PW. Or email to editorial@lincolnshirelife.co.uk