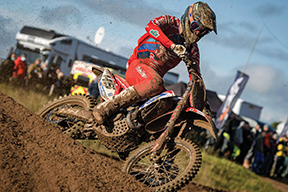 Buildbase Honda’s Tommy Searle secured the MX Nationals MX1 title with a pair of rock solid rides in the final round of the series at FatCat Motoparc, becoming the only Pro British MX1 champion of 2020.
Competing in the MX2 class for the team, Steven Clarke lost out on a tie-break for third overall on the day but his scores were easily good enough to cement his second-place position in the final championship standings.

Tommy started the day fourth in qualification before recording a hard-fought third in the opening 25-minute plus two lap moto on his CRF450R after taking advantage of a last corner stall by Jake Millward.

With the deep-sand circuit cutting up rough, Tommy took no chances in race two, safe in the knowledge that a second-place finish would give him the coveted crown by a commanding 38 points.

“It’s good for Honda after all the effort they’ve put in this year – it’s not been easy for anyone,” said Tommy.

“It’s the only thing to win this year and I’ve won it so that’s all I could do. Obviously, I’d have liked to have won [the overall] today but Brent Van Doninck rode well and I didn’t ride too good in the first race. I had good pace in the second race but I didn’t get a very good start.

“It’s equivalent to the British title because every rider was in it apart from Shaun Simpson and he’s injured anyway. We had a strong championship this year and I’ve been consistent and haven’t finished out of the top three in any of the races, so I’m happy and I’m happy for the team and for my mechanic, Willie.

“The MX Nationals have put on a brilliant series and everyone knows it’s the only championship in Britain this year and I’ve won it!”

Tommy’s MX1 team-mate Jake Nicholls was still suffering from a thumb injury sustained last time out at Cusses Gorse, which has kept him off the bike, but he pushed hard all day. Qualifying ninth, he followed Tommy across the line in the opening moto but struggled to sixth in race two as his lack of saddletime began to show.

Buildbase Honda boss, Dave Thorpe said: “The MX Nationals have proved it was possible to run a series, even without spectators. They’ve dug in, they’ve followed the rules and have done an amazing job.”