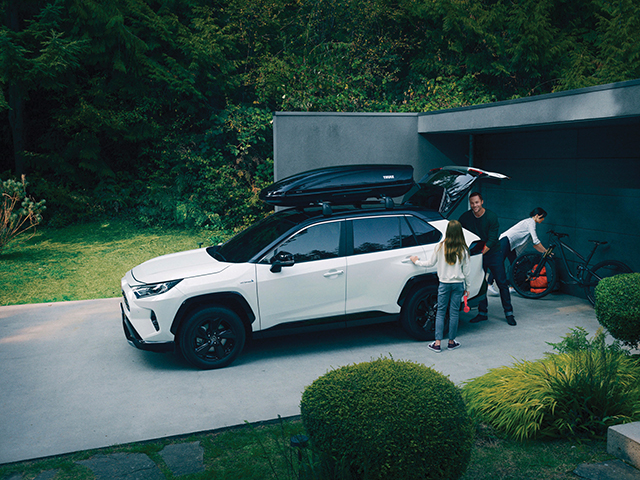 Tim Barnes-Clay test drives the latest Toyota RAV4 and finds that it’s a bit of a head-turner.

My son was the first to admire the RAV4’s chunky appearance, followed by a guy at my Covid-19-compliant exercise class – and then the fitness instructor. Usually, these guys are fans of sporty BMWs. I think the twin tailpipes and the pleasing symmetrical shape of the Toyota aroused their interest, but I’m still unsure. To me, its looks are okay – but they’re not all that.

There’s no question about the car’s family transportation abilities, though. The fifth generation of Toyota’s global best-selling SUV crossover has bags of room for five people – and the boot capacity is 580 litres. That’s enough for a week or two’s worth of shopping – and a buggy – or a bunch of golf clubs, depending on your lifestyle. What’s more, if you’re on, say, a tip run, you can fold the rear seats to extend cargo space.

Performance-wise, the SUV is relatively quick off the mark. Plant your right foot hard on the accelerator pedal and the 0-62mph benchmark can be done in 8.1 seconds. Doing this kind of goes against the point of buying the upmarket ‘Dynamic’ 2.5 Petrol Hybrid AWD model, on test here. Used efficiently, the self-charging hybrid will return late 40s mpg quite easily, but stamping on the gas just uses up any electric power you’ve generated in a jiffy.

Half the fun of driving the RAV4 is keeping the needle in the ‘Charge’ portion of the power band. You’re still doing great when you rise to the ‘Eco’ section, but you know you’re in fuel-draining mode if you hit the ‘Power’ area of the dial.

As well as a premium feel to the fixtures and fittings, the ‘Dynamic’ grade is kitted out with front and rear parking sensors, dual-zone air conditioning, blue ambient lighting, intelligent adaptive cruise control and a powered tailgate. A panoramic roof, as fitted to my loan model, is available as an option. It costs £860, but it makes the cabin feel even more airy and spacious.

The SUV handles more like a car than a high-rider, thanks to a better suspension arrangement and a lower centre of gravity. The steering is sharper than before, and the automatic continuously variable transmission (CVT) is far smoother than the ‘whirring’ CVT systems we’ve had to endure in the past. Steering wheel paddles are also there if you’re into engine braking.

Thanks to all-wheel drive, this RAV4 can handle its fair share off-road. It’s not a mud-plugger, but the Toyota will pull itself across gravel, dirt tracks and fields with ease. You won’t be wincing too much as you do this, either, because the car’s high ground clearance helps prevent any undercarriage grazing incidents.

With performance, efficiency, off-road ability, space, and arguable good looks, the newest RAV4 is sure to continue selling like hotcakes. But it’s only a matter of time before the hybrid element disappears and we see pure electric propulsion become the norm with Toyota and other mainstream brands.