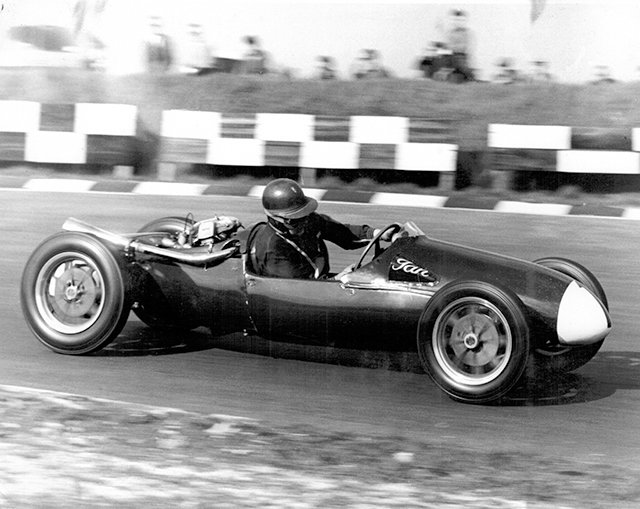 Jack Pitcher – The champion motor racing farmer.
Jack was the eldest son of Mr and Mrs Frank Pitcher, a South Lincolnshire farming family based in the Wrangle and Friskney areas. He had an interest in sport in general and a lust for speed. He was destined to become the British Formula 3, 500cc racing car champion in 1960.

Jack was born in 1930, in the village of Wrangle, near Boston. He played rugby, darts and bowls locally and was a keen swimmer, gaining his one million metre badge at the Boston pool later in his life. But in 1957 he took up Formula 3, 500cc car racing, with his younger brother Peter taking over more of his farming duties. Jack purchased a Cooper-Norton racing car. The engine was tuned by a Norton expert, Ray Petty, who learnt his craft under Francis Beart, the renowned Manx Norton maestro and former Brooklands star. Jack was friendly with local Wrangle garage owner Gordon Lee, who remained his racing manager throughout his racing career, and Sam Mason his mechanic. Gordon later moved his business to the Hawthorn Tree garage, Boston. Formula 3 was the starting class of many future stars in the sport including Stirling Moss, Peter Collins, even Bernie Ecclestone. Just prior to Jack, it was the likes of Don Parker, Jim Russell and Ivor Bueb, leading the way.

Jack made his debut at Mallory Park on 12th April 1957. His first win during this debut season came at local Cadwell Park on 5th August where he won the handicap race. The following year he notched up eight wins. But also he made the pages of Tatler magazine, where he was pictured posing with two fashion models at the British Grand Prix meeting at Silverstone. The 1959 season brought Jack another seven wins and six second places and he was runner-up to Don Parker in the Formula 3 championship. On Boxing Day that year Jack won the Francis Beart trophy at Brands Hatch.

We now come to 1960, and what a great season this turned out to be for him, with twelve wins, one second place, one third, one unplaced and two retirements. Jack opened his season with a win at Brands Hatch on 8th April, his last win of the season came at Snetterton on 9th October which also closed his season. The title of British Champion for the Formula 3, 500cc class was won.

For the forthcoming 1961 season Jack signed up to drive for the Alexis team in the Formula Junior 1100cc class, which was set to replace the 500cc motorcycle engine cars later in Formula 3, as well as his own trusty Cooper-Norton. He also purchased a Lotus for the second half of the season. But the season did not turn out too great for Jack; although he won every 500cc race he completed, he lost his title to Mike Ledbrook. The mixing of the two classes, the 500cc and the junior and the Alexis team, with drives in mainland Europe, took its toll; the meetings he lost cost him the 500cc crown. Jack made his European debut at the Monaco Grand Prix meeting in Monte Carlo, in the Formula Junior support race, driving the Alexis. After a tedious journey getting there, and an accident in practice he had an eventful race. At one stage he had moved up to fourth after starting seventeenth on the grid, but a slip-up at a corner saw him finish twelfth.

Another European journey took him to Reims, where unfortunately he suffered a crash, hitting a banking at over 100 miles per hour. Luckily he did not require the assistance of the waiting ambicopter; he walked away with just a bleeding nose and a good bruising.

Jack managed to win at his last meeting of the season at Snetterton, which turned out to be the last of a very distinguished career. Some of the tracks Jack raced on are now long redundant, including Crystal Palace, South London, and Aintree, Liverpool, situated at the famous Grand National horse race track. The others included Catterick, Rufforth and Full Sutton situated either side of York, and Whitchurch, near Bristol, which were all old airfields. After announcing his retirement from the sport, Jack said it was just getting too costly, driving the Lotus car – a new engine for that had cost him £300 and racing costs another £200 over a ten-week period. Looking back at his racing career, Jack was probably lucky to escape any serious injuries when the track safety measures of those days are taken into consideration.

Jack married Margaret (née Upsall) in 1964 after his racing days were over, and they had two sons, Phillip and Stephen. Later in his life he gained a private pilot’s licence, and would take his friends (including me) for a flight from Skegness airfield. Jack also joined the Boston Veteran Bicycle Club, and purchased an Ordinary (penny-farthing) machine from Austin Munks, the Leverton garage proprietor and former motorcycle racing star. He soon gained an excellent collection of cycles including a very rare 1896 Ariel quint, a five seater pacing machine, and a child’s trike manufactured by the local Boston Company of Holland Bros. Jack also had a penchant for bubble cars, and owned three fairly rare Bamby cars manufactured in Hull. He also found his mother’s old Morris eight Series E car; this was the car that he had learnt to drive in, condition almost derelict, in 1973. So he purchased it for the princely sum of two pounds. Jack reconditioned it and made a chance remark that it would outperform the present day models. This was overheard and a challenge was undertaken to celebrate sixty years of Morris Motors manufacture. So with the assistance of his two co-drivers, friend Billy Rose, and wife Margaret, they completed 311 laps of Silverstone circuit over the twelve-hour reliability run period, and was the only vehicle still running at the end. Nothing of this event was ever made by the manufacturers! Jack was also a keen Boston United football club supporter, where his father had been president of the club during his lifetime.

Jack collapsed and died on his allotment, at the relatively young age of 68 years, during April 1998. It was always a pleasure to share his jovial company, with not the slightest hint of what he had achieved in the world of motor racing. In fact he never mentioned it unless asked, but he continued his interest in motor racing all his life. He truly was a charming, unassuming Lincolnshire sporting character.

I would like to thank Mrs Margaret Pitcher and her family for allowing me access to their family archives and for all their help and assistance.