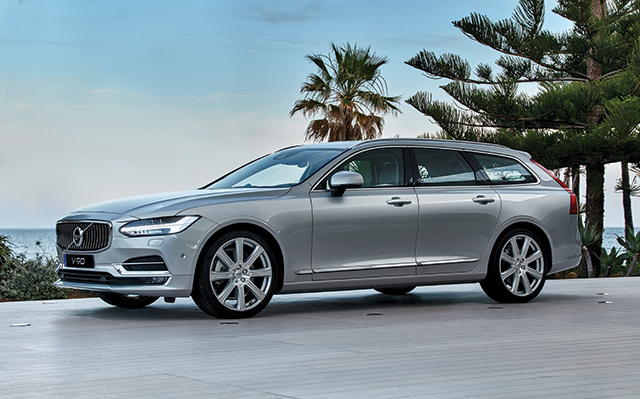 The UK Car of the Year Awards are chosen by a panel of 27 motoring journalists, who write for influential titles such as The Sunday Times, The Independent, The Telegraph, Top Gear, Auto Express, CAR and Esquire.
Nat Barnes, one of the judges, described the V90 as “simply gorgeous inside and out” and having “made the estate car desirable again“, while fellow judge Nargess Shamanesh Banks said its “contemporary clean design reflects a confident new Volvo – here beautifully applied to an estate car.“ The V90 houses a fairly small four-pot diesel turbo power unit under its bonnet, rather than a rumbly V6 lump found in German marques. There is also a petrol hybrid if you’re feeling ‘green’.

The boot floor turns into an even larger level surface when the seats are folded, making it the perfect vehicle to transport stuff to the tip, or outsized items back from DIY furniture stores.

But the V90 will win over hearts with its ride rather than its load capacity. The cabin is excellently refined and just so utterly comfortable to spend a long time in. To be fair, Volvo’s seats on all its models are top-notch. The car will take four adults, or two adults and three kids, for a cruise all day long without anyone feeling fatigued.

The steering is weighted nicely and there’s very little body roll in corners. It’s all very stress-free, even at a good lick on a challenging road. It’s good news for the Volvo V90 on motorways, too. It drives with composure and tracks attentively to its lane. At city speed, the ride stays graceful.

The range is divided into two turbo-charged diesel units, named D4 and D5 – and the factory-fitted gearbox across the lineup is an eight-speed auto. If you want manual, you’ll be left wanting as there aren’t any plans to supply a ‘stick shift’ version. Then there’s the top of the tree T8, which is a plug-in hybrid. This will be available in 2017.

There are two levels of trim: Momentum and Inscription, and both come with good levels of kit and Volvo’s safety system. The V90/S90 models also come with Pilot Assist, which offers up a semi-autonomous driving function. Volvo could well be offering us a glimpse of what things will be like in the automotive future here.