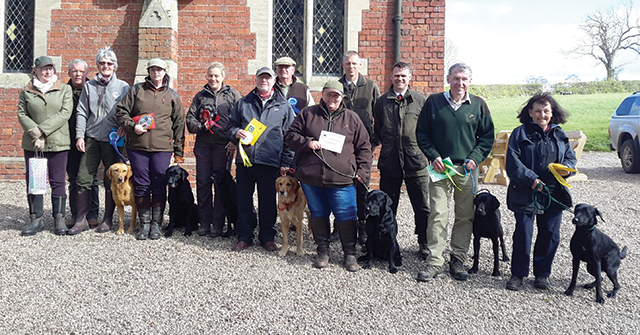 Report on Intermediate Working Test and Novice Dog/Novice Handler Working Test on Saturday 15th April 2017 at Worlaby.
Mr T Lamyman was kind enough to allow us to hold our working tests on this fabulous ground. With lakes, hillsides, rough cover and trees, this is a test setters’ paradise.

On this Easter Saturday, we were bathed in sunshine for most of the day, but a chill wind blew along the valleys, keeping the dogs cool and helping with scenting.

Sue Lowe was our chief steward and Julie Campbell, Martin Eveleigh, Mike Birchall and Andy Slingsby were our judges for the twenty-two novice dogs/novice handlers and seven intermediate dogs.

Test 1 was a picking up exercise, where two out of three dummies had to be picked from the cover close to a fence.  Intermediate dogs started further away than the novice dogs/novice handlers.

Test 2 was a good discriminator. For the novice dogs, a mark was thrown 60m away on the hillside, and then another mark was thrown into a hollow halfway between dog and mark. The dogs had to pick the retrieve in the hollow first.  Intermediate dogs had the mark on the hillside. They were sent for the mark, but handlers had to stop the dogs and put them into the hollow for a blind. Finally, the mark was picked.

Test 4 was further along the hillside. Novice dogs had a mark to the right, diagonally up the hill, and a blind straight up the hill which was picked first. A mark was thrown in the same place for the intermediate dogs, but their blind was along the base of the hill into the wind.

Thirteen novice and five intermediates went through to the afternoon for two more tests near the lakes.

Test 5 was a two dog walk along the bank of the lake. For novice dogs, a shot was fired and a dummy thrown to the left into the water. Another shot was fired immediately for a second mark on the hillside to the right. The first dog was sent for the water retrieve, running in front of the second dog to reach the water. The second dog went for the other mark. The dogs changed sides and the exercise was repeated. The water retrieve was the same for the intermediates, but the second was a blind behind a tree a little further away than the novice mark.

Test 6 was a static test. Two dogs were side by side on a grass track running along the lakeside. A mark was thrown in front and the first dog had to turn and pick a blind retrieve placed around a bend. Handlers could see the dog and the dummy was visible to the dog once around the corner. Then the dogs swapped places. The distance was shorter for the novice dogs.