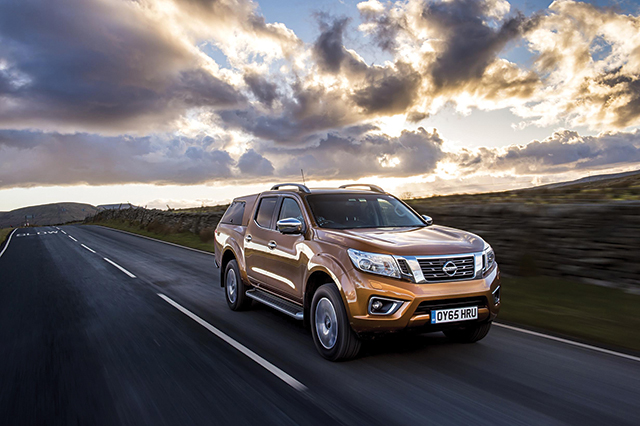 You’ve got pulling power with this Navara

With the low sun lighting the road home, I drove the new Navara on a winding and gently undulating route, as lengthening shadows trailed in my wake like wind-rippled pennants.
When I gushed about the Navara to my friend Robert Bellamy the builder, he voiced scepticism: “You don’t sound so much like The Bard of Avon singing the Nissan’s praises as The Bard of Rave-On taking the Nissan!”

When laughter subsided I threw down the gauntlet: “If you don’t believe me, then grant me an afternoon of your time and I will convince you that for the likes of you, this Navara is Nirvana.”

With brawny beauty, the high and mighty up-rearing of metallic majesty gleams with uncompromising purpose. And with 18” alloys, roof rails, side steps and rear privacy glass you are very much aware of admiring glances.

To a vicar’s wife it might want for gentility but for a beefy builder, the new Navara definitely is built to order, with wheel arches bulging like biceps and a visor-shaped grille suggesting a helmeted countenance that will brook no nonsense. And no nonsense is what this two-tonne double cab with a 3500kg towing capacity and a now 67mm longer plastic-lined load bay is about. But the big news is the new, fully independent multi-link rear suspension.

So what’s the top specification £26,209 plus VAT, Tekna double cab with the 190PS 2.3 dCi Twin Turbo engine (that has given sterling service across both the Nissan and Renault commercial ranges) really like?

“A workhorse,” I hear you say. It’s not made for jolly boulevard cruising on sunny afternoons in Bournemouth. Utility has to trump sybaritic serenity. But that’s not the case with the Navara. You get your cake and you can eat it.

You could go to The Palace in one of these new Navaras – not only to point the crumbling brickwork but to collect your MBE with the wife alongside and the kids in the back.

“By gum!” exclaimed Robert. “I’ve got a bad back but can’t even tell.”

“That’s because the seat design is inspired by NASA,” I pointed out. Not to get too technical, they appear to be constructed with voyage to Mars specifications in mind.

It might not be rocket powered but courtesy of the gutsy engine you have the pulling power to haul a 3500kg asteroid for a couple of astronomical units of distance without stopping for fuel. It’s amazingly economical for such a large vehicle. I got more than the claimed 40.3 mpg when driving gently.

It’s a lovely sweet engine that is barely above tickover at motorway speeds as it rides beautifully with the improved suspension that smooths away carriageway carbuncles. If you really want to hurry you can reach about 110/115 mph and enjoy swapping the ratios manually in the seven-speed auto box – though it’s best left in auto to do the job for you. And importantly, a lot of off-road capability comes at the twist of a dial into 4wd high or 4wd low.