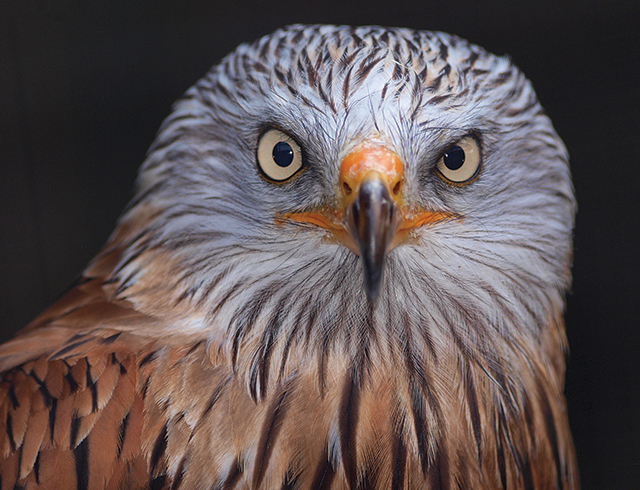 As a result of the world’s longest continual conservation programme, the UK population of kites has risen to such a healthy level that they can now be seen in areas where they have been absent for more than 100 years.
The Red Kite (Milvus milvus) is one of Britain’s most beautiful birds of prey and its flight is among the most free and accomplished of all raptors. Its rusty red plumage, deeply forked tail and often angled wings make it easily identifiable as it twists and turns in the breeze looking for carrion, and it is often seen flying above roadsides looking for roadkill. So valued was it for its ability to clean up the streets of medieval London that to kill a Red Kite was punishable by death, though attitudes changed and by the 1890s it was persecuted to near extinction in Britain by the Victorians. Nowadays we have a healthy population of Red Kites as the result of a very successful reintroduction programme, but as recently as the mid-1990s they were extremely rare in the UK.

Red Kites frequent a wide range of farmland and upland habitats. They like forests and woods with mature trees for safe nesting and roosting sites, but conversely need extensive open areas of farmland, pasture, rough grassland and heath for searching for carrion. However, they do congregate in places where food is readily available, such as rubbish dumps or special feeding stations, which have been set up in recent years.

It is principally an opportunistic carrion feeder, being too weak-footed to kill live prey any bigger than a baby rabbit. Dead rabbits form a major part of the kite’s diet, and is an ideal food source as this bird prefers smaller animals, finding it difficult to break through the tougher skin of larger species. That said, sheep carrion does form a part of the bird’s diet in Wales and is sometimes important in harsh winters, but the availability is obviously quite limited. Kites will feed on almost any type of animal carrion, including roadkill.

The kite looks for food by circling and soaring over open ground, sometimes at some height, relying on its excellent eyesight to scour the terrain. Once it spots some carrion, it descends to the ground close to the carcass and walks over to feed. Small pieces of meat such as those put out at the kite feeding stations are often picked up without landing and either eaten in flight or carried to a safe perch. Live prey mainly comprises invertebrates such as worms – in Continental Europe flocks of Black and Red Kites can often be seen following tractors ploughing fields just like gulls do in this country. Small live mammals are only rarely taken when the opportunity arises.

FROM VALUED TO ‘VERMIN’
In medieval times, the Red Kite was a very common bird in Britain. Its functionality, cleaning up the dirty streets of London, was so valued by the authorities of the time that anyone found to kill a kite was given the death penalty. However, as times went on its numbers and habits caused a change of opinion. The kites would snatch food out of people’s hands – similar to the seaside gulls of today with holidaymakers’ fish and chips – and they also took linen from washing lines to use in their nests. By the sixteenth century a bounty was put on their heads as they were considered ‘vermin’. Gamekeepers wrongly accused them of taking live game and farmers even blamed them for killing young lambs, which they are simply not capable of doing. As the persecution continued and their numbers fell drastically, during the mid-1800s Victorian taxidermists and egg collectors began to target them too, as they became a valuable species to add to their collections. The Red Kite was extinct in England by 1871 and in Scotland by 1879.

In 1903 protection efforts began, but by that time the kites were down to just a handful of pairs in the remote upland hills of central Wales. Breeding pairs are quite territorial, remaining close to the nest site, and kites tend to stay in their home range all year round, so this small population remained very localised.

Numbers never increased much during the early 1900s, and it was later discovered that this was due to the upland habitat where they had retreated to not being ideal for the kites to thrive in as there was limited food availability. The population remained at below twenty pairs and in the 1950s the outbreak of myxomatosis devastated the kite’s principal rabbit food supply. Then in the 1960s the widespread use of pesticides resulted in a period of poor breeding success, largely due to the production of thinned eggshells which were easily broken during incubation. However, the small number of kites survived all this and later in the 1960s began to slowly spread to better habitats in lowland areas of Wales and at last the numbers rose above twenty pairs. However, during the 1980s it was realised that numbers were unlikely to reach a level sufficient for the species to spread out of Wales within the next several decades, so reintroduction was considered.

STRICT CRITERIA
For a reintroduction programme to begin in the UK, certain strict criteria must be met. These include the existence of good historical evidence of former natural occurrence; a clear understanding of why the species disappeared; only if the disappearance was due to human action and the species was unlikely to recolonise naturally would it be considered; the factors causing extinction have been rectified; suitable habitat is still present to support a viable population; the birds intended for release are genetically as close as possible to the former indigenous population and that the removal of birds for the project does not jeopardise the survival of the population from which the birds are taken. The Red Kite is one of few bird species in Britain that fulfils all the above criteria.
Juvenile birds were taken from Continental Europe where the population was very healthy, and were released at various locations in England and Scotland from 1989 until 2008/2009. The reintroduction proved a great success and by 2009 it was estimated that the total UK population was around 1,600 pairs. Later in the programme, kites were released in Northern Ireland and Eire, using juveniles from the by then healthy Welsh breeding population.

LINCOLNSHIRE KITES
The Red Kites that we are now seeing in southern Lincolnshire have spread from those released in central England, most notably in the Rockingham Forest area in Northamptonshire where around seventy birds were introduced from 1995-1998. By 2009, when the UK reintroduction programme finished, it was estimated that this area was home to almost seventy pairs.

During the early to mid-2000s kites began to be seen in the Stamford area, which is close to Rockingham Forest and just over the border into Lincolnshire. They gradually spread further east into Lincolnshire and in 2015 I began to regularly see a kite hunting for food in my village just north of Bourne. The bird is most likely a juvenile of one or two years of age which has taken up residence in Bourne Woods. I also regularly saw it in 2016, but have yet to see two together in the area, so I presume that there is not yet a breeding pair in Bourne Woods.

However, I’m certain that this is likely to change as the population centre in the Rockingham Forest area increases further and more juveniles make their way into southern Lincolnshire. With a Red Kite now definitely resident in this area, I would expect that there will be a breeding pair here within the next year or two.