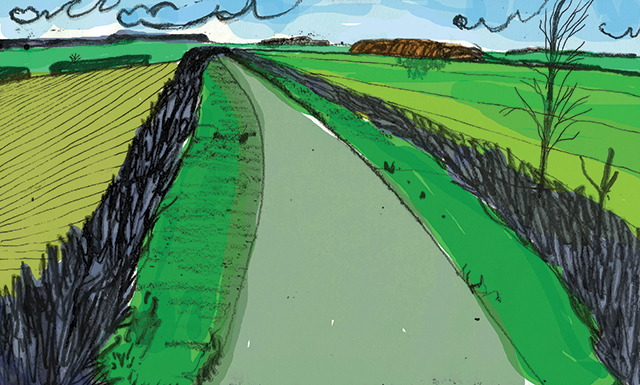 30th March: patchy cloud, almost mild, almost spring – by Maxim Griffin.
Among the many Good Friday rituals mentioned by the likes of Ethel Rudkin and Maureen Sutton, I can find no mention of the activities at Asterby on the Wolds. In fact, there is very little mention of it anywhere save a few old articles on local newspaper websites. The best course of action then is to investigate for myself and take on the role of pilgrim for the day.

7.30am – the service is due to start at 10 so I head out fast and light with no time to dawdle. After picking up some bread and cheese I make the quickest way out of town, west over the A16 bypass and its junction with the Horncastle road and on to the familiar paths that take me along the Twisties, a tangle of thorn trees and tributary streams that leads into the hills beyond Raithby – a mile along I remove a layer or two. It’s warm going, damp but warm enough to get down to shirt sleeves. There’s been a good deal of rain lately and the low lying route is muddier than usual – I nearly slip fording the beck, new boots take on a little water.

As I’m walking the quickest route, the plan is to stick to the back road from Raithby to Stenigot. I’ve walked this way before – uphill and a little dull – it takes about an hour and a half but it gets one into the Wolds quickly enough. Over the ridge at Cadwell Park, the bank holiday weekend bikers are already revving around the track. A loudspeaker echoes – indistinct instructions hum with the birdsong – blackbirds flit between open beeches – crows at crowing. No cars though. I don’t pass a soul all the while I’m walking. The road rides the ridge west, falling away either side with new growth and chalk. As the sun gets higher, shadows cast on fields – that same pattern and colour so familiar from the wings of Lancasters – tan and olive and grey with moving light. Along further until the mast at Stenigot is bright on the horizon, then it fades and disappears into low sky – noticeably colder now I’m a little higher but walking keeps me warm and to stay that way I keep moving fast, even though my left boot is squeaking with mud.

Over the ancient and mysteriously named Bluestone Heath Road – a call back to the post glacial erratics that used to litter these ridges, all moved now, give or take, but it would have been a similar landscape to Delling in Wiltshire, where the natural deposits of rock were used in the making of Avebury stone circle.

At Red Hill, gentlemen in hi-vis coordinate cars parking. I trudge over the meadow and around the bowl of the old quarry. There’s a brass band forming up – occasional parps. After taking a little food and water I make my introduction and withdraw to a vantage point – I want to watch proceedings like a hawk. To my surprise, down in the valley quite a congregation have mustered and have begun the way uphill led by three crosses. It is an arresting sight and not a little medieval feeling. They stop every so often and sing a line or two – wavering voices on the wind – a shaft of sun breaks through – the procession moves, pauses and sings again – wavering voices on the wind mixed with birdsong, crow call, dog bark and far off motorbikes. It is solemn but uplifting, a strange mix of the pastoral and ritual – my attempt to count the numbers stalls around 200. As the congregation reaches this temporary Golgotha, the crosses are raised and people gather and it dawns on me that my place as an observer is best away a little, so I climb up into the thorns to watch from a respectful distance. Hymns strike up with brass and birds and the sun falls across the Bain valley in bolts against steel grey. As a young girl takes to the lectern to read, I slip away quietly. Overhead, a hawk rides thermals up and up.

Taking the ridge north, through steep woodland towards Stenigot tower. Initially a radar station, giving early warning to midland targets during the Second World War, it was upgraded during the ’50s to a communications relay base. The tropospheric scatter dishes were pulled down in the ’90s but still sit onsite like a heap of woks awaiting the washing up bowl. It’s an enigmatic place and a world away from the procession and service at Red Hill. This is a place of secrets and danger, machines that blip ominously – indeed, the base exists within the hill too, deep in the chalk are bunkers and ruinous offices. This is a place that was built to withstand bombardment. I can still see that hawk – circling Red Hill and the last of the service – the congregation heading back down hill, refreshments to be served after at a nearby farm. Tempting though the prospect of a brew and a sandwich with a bishop is, I shall not intrude.

Moving swiftly along another ridge, burying miles underfoot with the same green and tan patterns falling around me. What happens on Good Friday at Red Hill is a singular event, the remote location and solemn procession make for a scene out of time – one worth witnessing, one worth hearing. If you close your eyes and listen it could almost be the seventeenth century, save for the hum and buzz of Cadwell’s motorcycles. Onward down to the edge of the Wolds and on to home, eighteen miles walked in a few short hours, not bad going and worth each step taken for the eerie, halting chorus on the hillside.