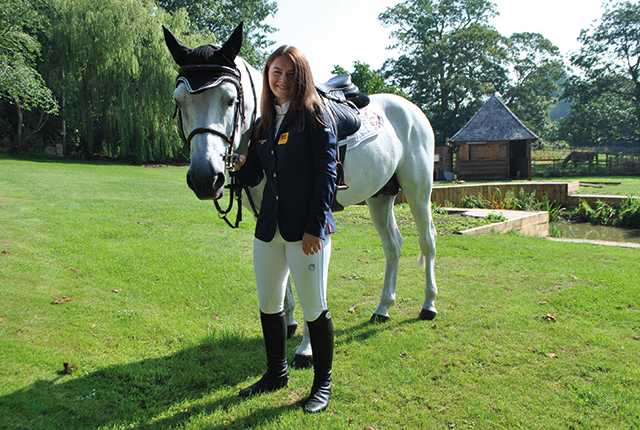 Holly Truelove from Worlaby and her stallion Rexter D’or were recently selected to compete at the esteemed 2019 FEI European Pony Championships for Team GB.
The high-profile event is the pinnacle of the equestrian calendar, this year taking place in Strzegom, Poland.

The competition acts as a qualifier for the FEI World Equestrian Games and the Olympic and Paralympic Games.

The selection process is notoriously competitive. Holly competed over four months to prove her credentials, including representing Team GB in two Nations Cups, winning a gold and silver across the events.

Holly said: “The process was nerve-wracking – there’s always pressure – but Rex and I have a good partnership and he always does his best for me. It’s important to make sure that we trust each other, and we do.

“It’s been a hectic few months trying to juggle GCSEs, training and competing but I try to stick to a regular routine, even before a big competition, to make sure Rex and I don’t get too excited!

“I would like to thank my trainer, Rachel Williams for all her help and guidance, as well as my sponsors Truelove Property and Top Crop Haylage for the support. Of course, I am also thankful to LeMieux, sponsors of the pony teams, and British Showjumping for giving me the exciting opportunity to compete.”

Her mum, Heather, said: “After a long selection process, it’s a relief to find out she made the team.

“Holly has risen to the occasion a fair few times now and always faces her challenges with a level head.

“Obviously, we’re ecstatic and I’m also pleased for all of the other girls; I think it’ll be a really strong team and I’m feeling confident.”

Holly’s stallion is a Connemara cross Selle Français grey pony, which she has been riding for the last two years. The D’or part of his name means ‘golden’ and the duo certainly hope to bring some gold back to Lincolnshire.