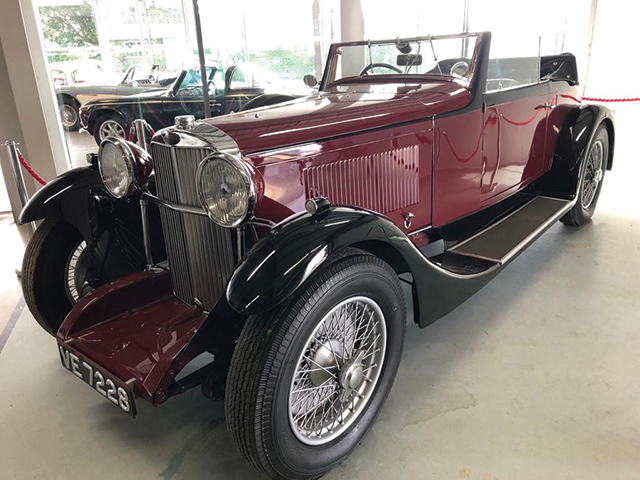 The car you see here, chassis number 7019P, was first registered in Cambridgeshire in April 1932. Little is known of its early history but a green logbook from what looks like 1959 (the date stamp is hard to read) confirms that it was then owned by a Clarence Kemp of Northamptonshire and that VE 7228 is the original number for the car.

About 20 years ago it seems that the car was acquired by a Mr JG Henderson of Consett who immediately set about a total nut-and-bolt rebuild which is documented in correspondence on file. The restoration was completed in 2002 and the odometer reset to zero. A detailed usage log over the next five years shows the mileage rising to 3,051 by September 2007, Henderson making numerous tweaks to the car along the way, reporting that it cruised easily at 70mph with good 40psi oil pressure when hot and noting that it was feeling freer and more powerful with every passing mile.

The car next appeared at the RM Sotheby’s auction in Battersea Park, London, in October 2009 with an estimate of £65k-85k where it appears that it was unsold but was very soon acquired by James ‘Jimi’ Heselden OBE. A former coal miner, Heselden made his fortune inventing the Hesco gabion, a collapsible wire mesh container filled with gravel which proved invaluable for flood control and for military fortifications. Heselden famously bought Segway Inc in 2010, maker of the Segway gyrobike, but later that same year he was tragically killed in an accident while riding one. Our vendor acquired the Sunbeam from Heselden’s estate in 2011 to join his fine collection of vintage cars and it has spent the last eight years proudly on display in the lobby of his Wolverhampton powder coating factory.

In fantastic condition throughout, VE 7228 has still only covered 3,850 miles since the restoration was completed 17 years ago. It has a particularly fine hood which has a glass rear window and detachable glass side windows. Believed to be the sole surviving Drophead Coupe of its type, it must also be one of the finest pre-war Sunbeams in existence.
£79,995.