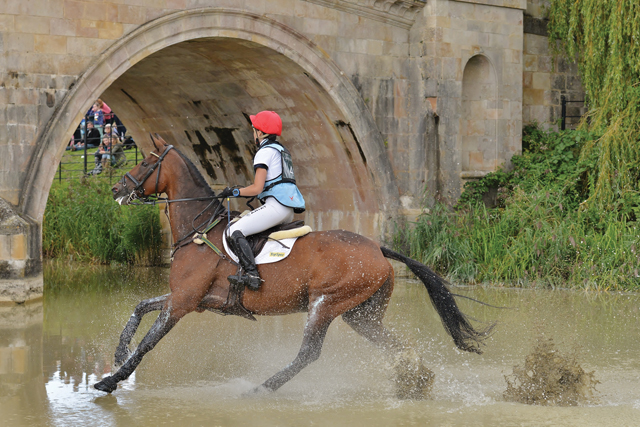 In a thrilling finale played out under glorious blue skies, Germany’s Michael Jung and his superstar partner, La Biosthetique Sam FBW, took the Land Rover Burghley championship title, and in doing so became the first German combination to have their names inscribed in the event’s famous history book.
The reigning Olympic and European Champion could not afford a single mistake in the final showjumping phase of the competition as the rider before him, Tim Price, had piled on the pressure by jumping an immaculate clear round. But Sam, now sixteen and undisputedly the best event horse of the modern era, gave every fence feet to spare. The grin on his rider’s face, together with the accompanying air-pump as he crossed the finish line, told the story.

“To win Burghley is very special,” confirmed Michael, who had an eventful weekend having fallen from his other ride, Fischerrocana FST, after the mare unexpectedly slipped in the water under Lion Bridge on the cross-country. “I am lucky that I have two horses that have finished safe. Sam gave me a very good feeling warming up for the showjumping; he felt powerful and he was very concentrated. He is like a good friend to me; I have learnt a lot from him and hopefully he has learnt a little from me.”

After battling until the end, New Zealander Tim Price had to settle for second place with Varenna Allen’s and his own Ringwood Sky Boy.

“The horse has been improving in every way, so I knew I could be up there in the dressage and hoped I’d stay there after the cross-country, but to still be in this position today is very exciting,” he said. “Ringwood Sky Boy is not natural in the showjumping, but he tries very hard and he is learning to be careful at the right times.”

Tim’s wife, Jonelle, whose fast cross-country round with Trisha Rickard’s Classic Moet was considered by many to have been the performance of the day, dropped one rail to slide from third to fifth place. Nevertheless it was a memorable Land Rover Burghley for the Antipodeans – second to sixth places were all claimed by riders from the southern hemisphere.

Australia’s Christopher Burton delivered two masterful performances on his two rides – TS Jamaimo, owned by Richard Ames, Alan Bell and Russ Withers, and Haruzac, owned by Alan Skinner – to finish third and fourth. With the former he was the only rider to finish on his dressage score.

“I’m delighted with both horses. In 2004 as a young rider I flew a horse here from Australia, but we only got as far as fence three,” he smiled. Yesterday was the first time I’d seen the finish flags.”

Sir Mark Todd completed the domination from Down Under by coming sixth on Diane Brunsden and Peter Cattell’s Leonidas II. In seventh was Frenchman Cydric Lyard (Cadeau Du Roi).

Although outside the top ten, local rider Ros Canter had one big aim: to compete at a four-star before her thirtieth birthday. Aged twenty-nine years and nine months she not only completed the Land Rover Burghley Horse Trials in 37th place, but won the prize for the highest-placed British first-timer with Caroline Moore’s Allstar B.

“I’ve been coming to Burghley since I was five years old; I used to compete here in the Pony Club showjumping competition,” said Ros, who is based in Louth, Lincolnshire.

A brilliant performance in the dressage arena had left the pair in tenth place going into the cross-country phase and their performance on Saturday was marred only by a slip up at the influential Discovery Valley (fence twenty-four).

“Albie is such a gentleman and he has proved that he is, without a shadow of a doubt, a real four-star horse,” said Ros. “Of course you always want to do a little bit better, but overall I’m thrilled to have made the step up to this level – it’s a really big thing and has given me confidence that I can take forward from here.”

Albie, an imposing ten-year-old 17hh gelding, jumped an immaculate showjumping round on the final day, just clocking up one time penalty.

“He will have a well-deserved holiday now while I concentrate on the younger horses,” said Ros.

Away from the equestrian event another competition was proving to be just as competitive: the search was for the event’s best presented trade stands.

“This is our third year at Land Rover Burghley. It’s a show that we are always keen to come to and always look forward to,” said the company’s Sam Pullen, who explained that the garments, which bear hand-drawn and designed prints of elephants and sea turtles, are inspired by a tradition of menswear that hailed from the British Army.

Tristan Cockerill’s striking display of furniture made from driftwood was judged to be the best trade stand in the Burghley Lifestyle Pavillion.

“We can convert redundant items, such as old fishing boats and washed up driftwood into seats, glass-topped coffee tables and vases,” explained Tristan, whose simple but effective display demonstrated a variety of his bestselling products.

“We sold thirty vases on the first day,” he said.

Cambridge-based fudge maker, Fudge Kitchen (F1), won the best trade stand in the Food Walk – and after some thorough sampling it was easy to see why.

“All our fudge is handmade to a recipe dating back to 1830,” explained Lee, who has been coming to Land Rover Burghley for about ten years. Chocolate Orange and After Dinner Mint were just two of the mouth-watering flavours on display.

“We don’t cut up our fudge into squares – it’s made in loaves and we sell it by the slice,” continued Lee. “The inside of the loaf is meant to be a little bit gooey and sticky, whereas the outside is more crumbly.”