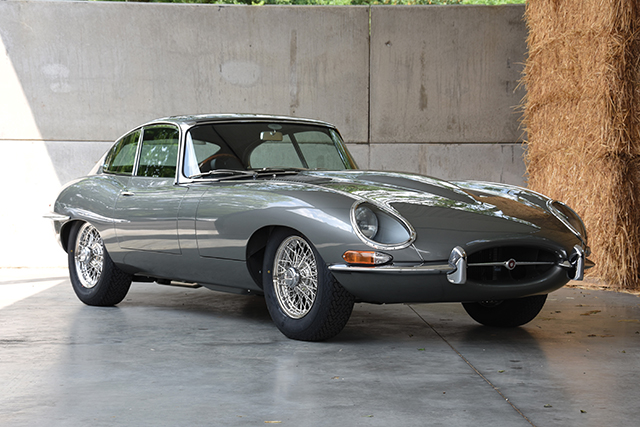 To many people the E-type is as sensational a car today as it was when it was launched in 1961. Then, of course, it was a sensation. It was vivacious, sensuous, shocking and fast – as much a symbol of the ‘Swinging Sixties’ as The Beatles or the mini skirt. But a sign of greatness was that the E-type was no passing fad. Over the years the love affair between this beautiful sports car and enthusiasts everywhere has endured.

Appreciation is often kindled by rarity. Relatively, the E-type is not rare and yet it is highly revered. There are, it is true, faster cars today and there are better built, more sophisticated cars. But it is debatable whether there exists any more beautiful car.

Nothing is perfect in the real world and the E-type was not perfect. It was, however, a tremendous step forward. Just as the XK 120 had brought racing car performance to the enthusiast in the street, so, 13 years later, did the E-type. And just as the XK 120 put Jaguar way ahead of its rivals in the performance stakes, so the ‘E’ did the same. Both boosted British prestige and engineering worldwide.

E-TYPE 60
E-types are not for posing; they are for driving. This is no static event: the E-type 60 will enjoy plenty of action over two days at the suitably historic Shelsley Walsh Hill Climb, the oldest race track in the world still in use, ideally situated in the Midlands, on 12th June 2021. That action will include competitive timed climbs, cavalcades and demo runs by famous cars and personalities. The charismatic ’60s and early ’70s will be celebrated in every way.

Star cars will include 9600 HP: the original launch press car, the oldest Jaguar E-type in existence, the original 150mph E-type and subject of the book The Most Famous Car in the World, published by Orion. Plus the red E-type from the movie The Italian Job.

The event charity partner is Hope for Tomorrow – with special guest Richard Attwood in attendance.

Entertainment includes ’60s tribute bands, ’60s and ’70s film footage on a big screen in the E-Theatre, as well as Q&As with celebrities fronted by Philip Porter.

Proving it had more than just good looks, the E-type won its first race, driven by Graham Hill, beating Ferraris and an Aston Martin. Remarkably, an E-type finished fourth at Le Mans.

Enzo Ferrari, no less, described the Jaguar E-type as, ‘The most beautiful car in the world’.