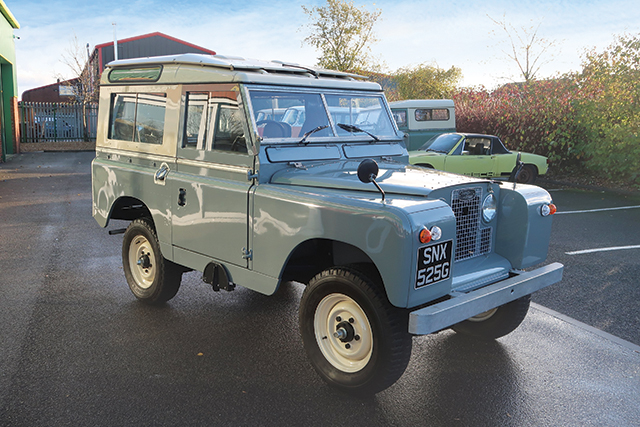 The Land Rover ‘Series’ model, the forerunner of the Defender, was developed after World War 2 by the Rover Company in Coventry.
The chief designer, Maurice Wilks, designed a cross between a utility vehicle similar to the American Jeep and a tractor, even incorporating a PTO (power take off). Due to strict rationing of steel, the bodywork was produced from Birmabright, an aluminium/magnesium alloy, and the colours restricted to army surplus colours, hence the distinctive variations on the colour green on early models.

The Rover factory had been bombed during the war and the production of the four-wheel drive Series was seen as a short-term way to increase cash flow until a new factory could be ready for production of the luxury saloon cars they were known for. This meant that the production of the Land Rover was made as simple as possible, requiring the least amount of tooling, welding and materials which were in short supply or rationed. However these restrictions proved to be the model’s strength – the Birmabright proved to be lightweight and rust-resistant and the distinctive boxy shape was simple to replace and maintain. The product was so popular it outsold the Rover car and so the Land Rover brand was developed in its own right and has indeed outlived the car brand – the last Defender, which in essence was constructed on the same lines as the original Series cars, rolled off the Solihull production line at 9:22am on Friday 29th January 2016.

At Woldside Classic and Sports Car in Louth they now have in the showroom a gorgeous 1968 Land Rover Series 2a SWB finished in the original Mid Grey with Ivory Safari Top. It is instantly recognisable as one of the most iconic vehicles of all time. The Series 2 production ran from 1958 to 1961 and there were two wheelbase lengths to choose from: the SWB at 88in and the LWB at 109in. The Series 2 was restyled and different seating plans were introduced. The model at Woldside Classics is possibly the most favoured of the bunch, with its grill mounted headlights and the preferred barrel side panels, compared to the earlier more utilitarian Series 1 models.

Showing just a recorded 42,000 miles, which is believed to be correct, this rare vehicle has had just four previous keepers from new. Details of all these keepers are on file, including the original registration document of 1968 showing the first dealer keeper, Charles Hull Ltd of Solihull.

Fitted with seven seats and the rare Safari Top, this vehicle has had a full restoration and conservation programme starting back in 2011 and completed in 2014 by renowned Land Rover specialists, Famous Four of Louth.

On the website there are numerous high resolution photographs and a video of the Land Rover in action, in which you will see the care and quality of the workmanship and attention to detail. The chassis was replaced with a galvanized one and then painted black to retain originality, the bulkhead has been replaced and every other component either replaced or restored to the highest standard. The Safari top and headlining materials are the original items in a remarkable condition and preserved accordingly.

Items improved from the original to enable the vehicle to be used safely in modern day traffic include the addition of inertia seat belts, parabolic leaf springs and gas dampers, an alternator and high torque starter motor. None of these items cosmetically detract from the original. On file are numerous invoices and a photographic journey of the restoration. This vehicle is of the highest quality – it is both beautiful and very usable. If you are thinking about restoring one of these appreciating classics, bear in mind that the cost of the restoration alone would be in excess of the asking price.

If you would like further details of this beautiful classic Land Rover please visit Woldside Classic and Sports Car’s heated showroom on Tattershall Way, Fairfield Industrial Estate, Louth, LN11 0YZ or go to www.woldsideclassics.co.uk or call 01507 606725.