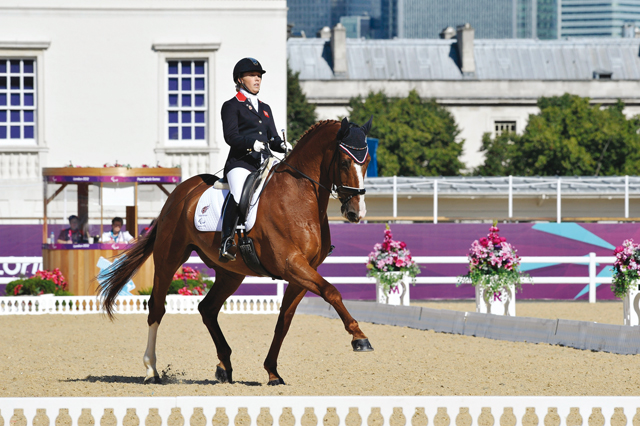 A glorious celebration of human endeavour

Truly this was a festival of ability, not disability, and the London 2012 Paralympic Games kept its Opening Ceremony’s spectacular promise to shine a light on the beautiful diversity of humanity.

Lincolnshire’s finest again played a thrilling role in ensuring that, after the summer of all summers, we will never see sport in the same way again.

As Harby’s Sophie Wells breathlessly observed after winning three medals on her Paralympic debut: “I never cry, but that was amazing. We’ll never be able to top this experience. It’s something quite incredible.”

Part of the gracefully domineering Great Britain dressage quartet, which has now won the combined Team event in five consecutive Paralympic Games, Wells claimed a gold and two silvers riding Pinocchio, and admitted: “We didn’t expect to be coming home with this amount of medals.”

As befits a double World Champion, Sophie was initially disappointed with ‘only’ winning silver in the Grade IV Individual Test, after a rare moment of miscommunication saw her fall a mere 0.737% behind Michele George, but ultimately it was only the vastly-experienced Belgian who prevented Sophie from taking three golds.

Wells was again less than 1% point behind George in the Grade IV Freestyle event, scoring a new personal best of 81.150% with her familiar five-minute Disney-inspired medley, appropriately featuring the theme tune from Pinocchio.

“I kind of knew it wasn’t going to be enough for gold,” Sophie admitted, but soon rediscovered her familiar, infectious smile. “You can’t complain when you do the best you’ve ever done before. It’s an honour and a privilege to be here. I’m not just riding for myself, this is for all my supporters.”

Wells was amazed at the public reaction to her success. “It’s weird – I never see myself as a role model. It’s a very humbling experience. I get hundreds of messages via the internet telling me I’m their idol, and it’s really hard to get my head around that. I just feel like a girl that loves riding ponies,” she said with typical understatement, preferring instead to focus on Pinocchio.

“He is in the best form of his life and he loves his work. He has won me gold medals and silver medals. If I can help people to enjoy horses half as much as I do, I’ll be delighted. I love horses. That is why I train and why I work with them. It is not because of the medals.”

Wells’s gold medal has been celebrated by the Royal Mail, like all British successes, with the issuing of a commemorative stamp and the painting of a postbox on Exchequergate in Lincoln. The twenty-two-year-old, who suffers from Amniotic Band Syndrome, may now recommence the Sports Development degree at Lincoln University from which she took a break in order to train for the Paralympics.

A relative veteran at the age of twenty-five, Rob Welbourn won his fifth Paralympic Games medal, and despite an otherwise frustrating week said: “I’m over the moon with that. To come away with a medal from a home Games, you can’t ask any more”.

It was the third consecutive Games in which Welbourn has featured on the S10 400 metre freestyle podium, after winning silver in Athens and Beijing. The man from Deeping St James was edged into third by a blanket finish in his heat, to qualify fifth-fastest, but in the final powered his way through the field to lead after 250 metres. He remained second at the last turn, only to fade into third place as American, Ian Jaryd Silverman took gold in a new Paralympic record.

There was to be no repeat of Welbourn’s own golden triumph in the 4 x 100 metre relay, after seeing the team home in both 2004 and 2008 – but it wasn’t for lack of effort. Twice he had to chase down a seemingly unassailable Australian lead on the last leg but, having succeeded in the heat, the team trailed in fifth in the final and once more he had to watch as the Paralympic record fell.

Three of the county’s brightest young track and field stars enjoyed bittersweet debuts in the Olympic Stadium, but all were left with renewed desire and optimism about their chances in Rio di Janeiro in four years’ time.

Seventeen-year-old wheelchair sprinter Jamie Carter, from Binbrook, stepped into the limelight on the anniversary of his grandfather’s death, and emotionally dedicated his qualification for the T34 200 metre final to his memory. Carter only began racing in November 2010, and didn’t make his international debut until May 2012, yet still set a new personal best to qualify as a fastest loser.

“My progress is unbelievable,” he said, when selection for London 2012 seemed a distant hope just twelve months ago. “The whole experience has been amazing. I’m one of the youngest guys on the team and I’m still learning really. This is hopefully the first of many Paralympic Games for me.”

With support from quadruple gold medallist David Weir behind him, Carter’s future – not to mention a place on the plane to Rio – looks assured.

Seated discus thrower Kieran Tscherniawsky, from Heckington, made further progress in only his second global competition but will also feel like he has a point to prove in 2016. The European record holder had set his sights on both a gold medal and new world record in London, but could only finish tenth.

His throw of 29.05 metres was over fifty centimetres down on his personal best, and Kieran displayed a rare moment of self-doubt when he said: “I felt like I was going into a competition where everyone was better than me, so I didn’t have a lot of confidence. I’m disappointed but this isn’t the end of me, I’ll be back stronger.”

The same defiant message came from Holton-le-Clay’s eighteen-year-old javelin thrower Hollie Arnold, as she produced a career best of 36.27 metres with her final effort to finish fifth in a competition which saw seven other personal bests and a new world record.

“If I had probably one more throw I might have gone up to third position,” she said, but remained gracious beneath the tears of defeat. “There were some incredible athletes out there and I was a bit nervous coming into the competition as I’m only very young. I will come back stronger. I did not expect to win a gold in London but Rio is going to be my time, so watch out.”

The intervening four years will not dim our memories of a glorious celebration of human endeavour, nor quench our appetite for the exhilarating spectacle.

Once again, it was our own Sophie Wells who spoke for thousands of disabled people around the world; those who have enjoyed competing at London 2012 and those whose sporting career has just begun: “It’s not something we’ll forget. I don’t think that life will ever be the same again.”