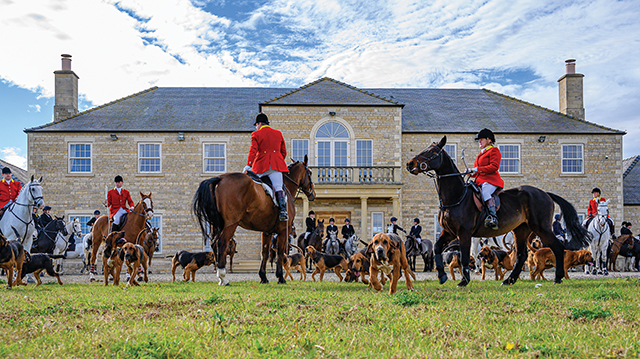 A record-breaking start to the season

Matt Limb OBE spotlights the opening meets of the Cranwell Bloodhounds at the start of their
30th season of hunting.

The Cranwell Bloodhounds’ opening meet of their season broke all records with some 100 riders out for the afternoon, showing just how popular and well supported this bloodhound pack is. Some of the field travelled many miles to take part in the Sunday afternoon on a typical autumnal day. The meet covered over 13 miles, with four lines of hunting, the longest being almost three miles, chasing their quarry – which for a bloodhound pack is the clean boot of a cross-country runner.

Established in 1992, this is the Cranwell Bloodhounds’ 30th season of hunting. A privately owned pack, it has gained a reputation for being friendly and welcoming. They follow in a tradition of hunting with bloodhounds that can be traced back to King Henry VIII.

Joint Masters, Wendy Broughton and Ben Wills welcomed the field at the hunt kennels, witnessed by many car followers. Speaking with Wendy, she admitted it can be hard work and takes several days to prepare for the opening meet, from making sure the hounds are ready, to planning the routes – but to see such a large crowd attending makes it worth the hard work.

The field certainly had a challenge keeping up with the hounds as observed by several riders taking a tumble at the many jumps. Frank Goddard, the Huntsman, spoke after the meet saying the hounds benefitted from recent hound exercise rides and hunted well along the lines.

But not happy with one opening meet, the Cranwell Bloodhounds hosted two. Coinciding with the school half term holidays, along with a growing interest among young riders, an additional opening meet was hosted for children and young riders a few days later. Again the Joint Masters welcomed them, after which they had three lines covering almost six miles, chasing 11 couple of hounds, with routes for the more advanced rider or the younger riders on lead reins, including several first-timers riding with hounds.

It has been an incredible start to the season for the Cranwell Bloodhounds and it is clear they keep to the spirit and ethos they started with some 30 years ago; to enable people to enjoy a day in the countryside with friends and like-minded people. But for me, it further proves the saying I heard some years ago, that hunting with bloodhounds is one of the best-kept secrets in the British countryside.