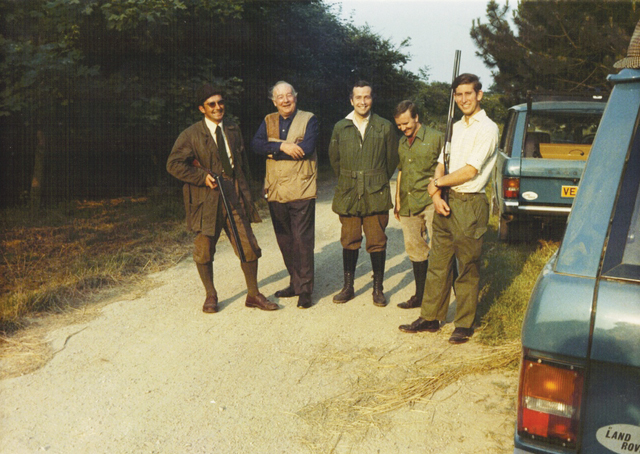 With the interest in this year’s Royal wedding, I thought it appropriate to share an experience I had with the Royal father-in-law, HRH The Prince of Wales, some years ago.
I left Caistor Yarborough school in July 1969 with only one aspiration: to follow my father, and great-grandfather, as gamekeepers. My father at the time was head keeper at Rothwell, a small estate in the wolds not far from Caistor. I was fortunate to be offered a position working under him by the famous Joseph Nickerson, farmer and sportsman, (later to become Sir Joseph Nickerson) duly starting work at Rothwell on my fifteenth birthday.

One evening in October 1972 the keepers on the estate, about seven of us including my father, were summoned to JN’s (Mr Nickerson’s) office at his house. He explained that we would be having a very important guest on the shoot later in the week: HRH Prince Charles. JN also explained that, owing to certain circumstances, the visit was an absolute secret and no one must know of it. The telephone then rang in the office, JN answered the phone and after some ‘umms’ and ‘ahs’ he said: “No you damn well can’t,” the caller being someone from the Grimsby Evening Telegraph, wanting to come and take photographs of the shooting party, top secret then!

The day of the shoot arrived and the keepers were instructed in the etiquette expected from them during the day by the prince’s equerry. We were to be introduced to Prince Charles individually by our Christian names, to which we were to reply with a ‘good morning your royal highness’ (being instructed by him that after the presentation ‘sir’ would suffice), and a smart bow. This caused some discomfort to me as the keeper (who will remain nameless) next to me proceeded to bob up and down like a nodding dog on the parcel shelf of a Ford Zodiac. He terminated his bow(s) with a smart curtsey and I almost bit through my lip to stop myself laughing, I was eighteen years old.

The shooting day was an absolute success, as most were at Rothwell, the last drive being a short one through Diana wood. As I emerged from the wood JN called me over to a small gathering of loaders and guests. I thought, “What have I done now?” I was prone to making some cracking cock ups, but the day had seemed almost perfect. I walked briskly over to the Range Rover. “Did you want me Sir?” I enquired. JN spoke: “Now Rod, have you any ducks coming to your pond at Nettleton? I want His Royal Highness to have a decent flight, maybe a teal or two.” I explained that I had a good show of ducks flighting in with about forty teal feeding the night before, plus a lot of mallards. “Right, you go with His Royal Highness in my vehicle and make sure he gets some good sport.” Little did I expect the next hour would hold so much excitement.

Prince Charles was to drive the Range Rover; his keeper from Sandringham, Mont Christopher, also came with us, and Prince Charles’ dog, I believe it was called Sweep, was in the boot. The bodyguard who had been with us all day, however, did not come with us, which at the time I thought nothing of. We had a bit of a problem getting off the estate as all the gates had been locked. We had to drive down a field headland, negotiate a few grass banks and emerge through a gap in the hedge, travelling across country to the flight pond at Nettleton.

When we arrived at the pond Mont Christopher got the Prince a gun from the slip and a bag of about fifty cartridges and he went off to the hide, some hundred yards or so away, taking his dog with him. Apparently the Prince liked to be alone on these simple occasions so Mont and myself stood talking by the Range Rover, recalling what a great day it had been. After about ten minutes we saw a van coming down the track in the distance, probably about half a mile away. “Who’s this coming?” enquired Mont. “I have no idea,” I replied. I did not recognise the van at all, and explained that I had never seen it before. There had been a good rain and the track was virtually impassable except for four-wheel drives and tractors. It was coming at a bit of a speed, and determination to keep momentum in the muddy, if not boggy, conditions. Mont looked a bit serious, walked to the Range Rover and got a spare gun from the rack built into the dog guard; he loaded it and then gave it to me. He then got another shotgun from the vehicle and loaded that too, putting some shells in his pocket, handing me an extra four or five.

I had still not really twigged what was going on so I asked him what we were doing. “We are security now, could be anyone in the van including terrorists,” he said. It was surreal; I was stood there with a shotgun thinking, “terrorists usually arm themselves with AK47s (Kalashnikov rifles) and here I am with a peashooter.” As the old van got closer I edged behind the bonnet of the Range Rover, thinking the engine block may afford me some protection from a high velocity bullet (or a dozen), although the fact was, that a twelve-bore shotgun was little competition against any semi-automatic weapon, especially an AK47 with a thirty- or fifty- round magazine. The van was still speeding along, and now only a few yards away. My heart was really pumping by now, not so much scared but anxious, and the adrenalin had kicked in. As the van got closer (within scaring distance of a shotgun) I recognised the driver. “It’s okay,” I shouted, “I know who it is.” It was someone who had been on the shoot during the day, and brought his wife along to try and get a glimpse of Prince Charles. I was relieved, but Mont was not so happy and sent the visitor on his way with a rebuke of some sort. His Royal Highness had a good flight on account of a number of mallards and five teal.

I have no idea why the royal bodyguard did not accompany us on that evening, especially taking into consideration the troubles of that particular period in time. The royal family were a high profile target and previously this year (1972) a bomb aimed at British soldiers killed seven civilians in Aldershot.

I remember the evening as though it were yesterday and feel some degree of pride with memories of the day. The 28th October was not the first visit to Rothwell by a royal visitor, nor would it be the last.
Sir Joseph Nickerson passed away in 1990. He was an innovative farmer, duck and pig breeder and an exceptional sportsman, probably the last of the great sporting shots of all time. The estate at Rothwell, including let shooting, still holds the record for the amount of partridges killed in a single day, a record I believe will never be beaten.

The first ever BMW iX