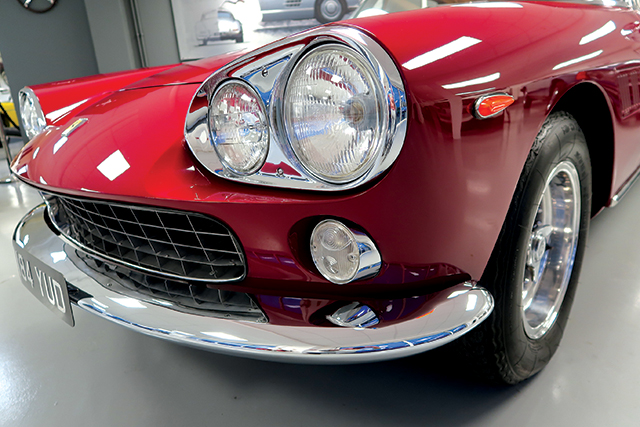 A thoroughbred from Ferrari…

Woldside Classic and Sports Car is home to a range of cars to suit most pockets but at the moment they have something very special in their showroom for the serious collector.
Their 1965 Ferrari 330 GT 2+2 is not the usual low slung supercar you would usually envisage when you imagine a Ferrari, instead it is an understated four seater which blends performance in the form of a 4.0 litre V12 engine with sophisticated Italian Pininfarina style.

This discreet luxury car was previously owned by one of the UK’s foremost Ferrari collectors and is one of just 453 LHD Series 1 cars made and supplied new to the USA. It is a Matching Numbers car, which denotes the chassis and engine numbers have a matching production number from new. Woldside Classic’s car has chassis number 6685 and was supplied new by Luigi Chinetti Motors Inc of Greenwich, Connecticut. It finally found its way to the UK in July 1988.

The previous owner took custody eighteen years later in 2006. At this time the Ferrari was fundamentally sound and complete but in need of restoration. Something of a perfectionist with many other rare Ferraris in his stable, he chose to have the Ferrari stripped back to bare metal without concern to the financial viability of his actions. Accompanying photos show that new inner and outer sills were painstakingly crafted for the car as were new floor sections and various bodywork repair panels. Re-sprayed in its original dark red livery and re-trimmed in light tan leather with red carpets, chassis 6685 also had its bumpers re-chromed, the original Borrani wire wheels rejuvenated and stainless steel brightwork re-polished. The steering, suspension and brakes were all properly attended to in July 2009 and a new stainless steel exhaust was fitted. Since then the car has further benefitted a thorough engine and gearbox overhaul and engine bay detailing at the hands of marque specialist Vic Cartmel some three years later, this lovely example has enjoyed a far more extensive and higher quality restoration than most of its surviving siblings.

The Ferrari is offered for immediate sale by Woldside Classic and Sports Car with UK V5C Registration Document, 330 Register history print, and a ‘no advisories’ MOT certificate valid until October 2017. There is a large photo file of the vehicle on CD-Rom, including the underside and restoration available for interested parties.

This is a beautiful and rare car which needs to be seen to be fully appreciated. You can get a taste of its exquisiteness from a short video presentation of the car which is available on their website www.woldsideclassics.co.uk. For more information or to view the car in their heated showroom on the edge of the Lincolnshire Wolds please call 01507 606725.