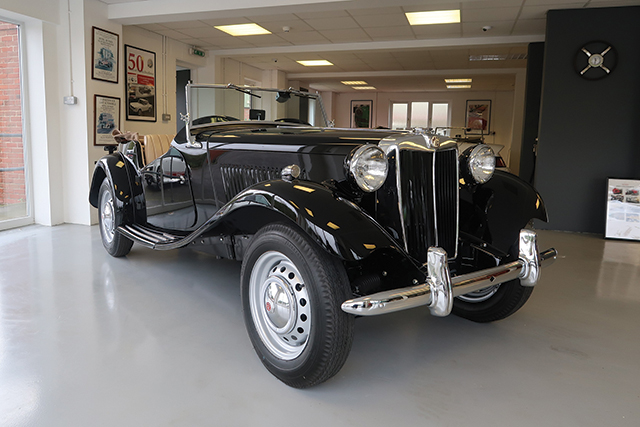 The ‘MG’ brand, with its distinctive octagonal badge, was a modified line introduced in the 1920s by Morris Garages, who produced the Morris Oxford in the early 20th century.
MG became a separate company from Morris Garages, named The MG Car Company, in 1930. It was taken over many times over the years and today the marque is owned by the Chinese company, SAIC (Shanghai Automotive Industry Corporation) and all cars are manufactured in China.

At Woldside Classic and Sports Car in Louth, they currently have on offer this beautiful MGTD finished in Gloss Black with Ivory trim and soft top. Manufactured in March 1950, this is an original right hand drive car with matching engine number.

This car has had a full body off chassis, no expense spared, nut and bolt restoration carried out in Woldside Classic’s dedicated workshop to the highest possible standard and is most probably one of the best cars in the country. The restoration has been catalogued and photographed over the past 18 months, the details of which will be added to the car’s already extensive history file.

Every mechanical part of the car has been dismantled and reconditioned, or replaced as necessary. The engine has been fully stripped with the cylinder block being re-bored with new pistons and the crankshaft re-ground with new bearings and a modified rear main oil seal assembly. There are parts invoices for over £12,000 in the file for the car – this excludes any labour costs and the bodywork!

The body was removed from the chassis with the bulkhead then split from the tub to allow access for necessary repairs. The battery box was replaced, along with the rear inner wheel arches before the painstaking task began of making the panels all perfectly straight and the panel fit better than new. The chassis, now completely bare, was fitted to a rotisserie to allow it to be fully stripped to bare metal and refinished in gloss black. Obviously all the suspension and braking components received the same treatment before being reassembled with new suspension bushes, brake cylinders etc.

When they were happy with the body panel fit, the car was finally painted and very carefully refitted to the chassis, which by now had all the engine, transmission, suspension and brakes assembled. Things were now finally starting to take shape. A new wiring loom and control box was fitted along with the addition of discreet traffic indicators for safer modern day driving. All the shiny fresh chrome was now fitted and the dashboard reassembled with newly reconditioned gauges. Finally the original seats, carpets and the soft top were refitted.