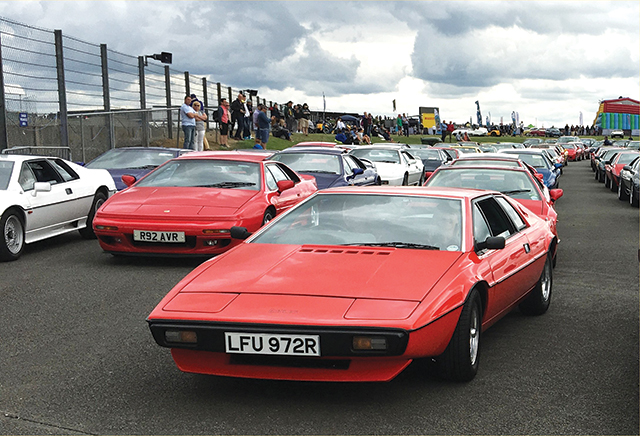 A unique car returns to Lincolnshire

Since being 10 years old, Gordon Masson has loved cars. His interest was sparked when hearing Murray Walker’s animated race commentary on the television. During the summer holidays in Aberdeen in 1971 Gordon and his friends imagined themselves as racing drivers.
When the boys heard the sound of an engine approaching, they stopped to gaze at the low white sports car driving past them. Gordon found out it was a Lotus Europa and Gordon’s dream from that day on was to one day own a Lotus.

As a young man with few commitments, Gordon was able to save for his Lotus. After months of searching, Gordon placed a wanted advert in the local Finefare supermarket for a Lotus Europa or Esprit. He was contacted a few days later by a lady saying she had a red Lotus Esprit for sale. At twenty-three Gordon had little knowledge of what to look for in a car, but seeing the stylish Lotus gleaming on the drive, he had to buy it. On 29th September 1983, twelve years after first seeing the Lotus Europa, he became the extremely proud owner of a Lotus Esprit S1. It soon became obvious that although the fibreglass bodywork had kept its looks, there were many major problems with the car. Gordon found a Lotus specialist at Kelvedon Motors, based in Spalding in Lincolnshire and contacted Pat Thomas. It transpired that his car had been with Pat previously and was the first S1 Esprit production car with the chassis number of 0100G, showing its position in history. Ten cars came off the production line at the same time, number six possibly being the Lotus Esprit famously featured in two James Bond films starring Roger Moore – The Spy Who Loved Me (1977) and For Your Eyes Only (1981). The screenplay for the first play mentions a red Esprit yet it was a white car that was used as the submarine car. The Esprit body and interior had been designed in Italy by Giorgetto Giugiaro. The Italians wanted the car to be called a Kiwi, but all Lotus car names start with ‘E’, and ‘Esprit’ was chosen. It became Lotus’ road supercar and during Gordon’s ownership Lotus had the car on loan for six years, developing a suspension system and putting it on display in the main reception area. Mike Kimberley, CEO of Lotus, called it ‘The jewel in the Lotus crown’ when the car was the backdrop at his retirement presentation in October 2009.

Since Gordon has owned the car, he has researched its history and spoken to many people about it. In the Lotus Build Book the car was referred to as a Demo version and was used by their engineers before being sent out to Lotus dealers. In 1976 the car arrived at High Cliff Motors, a Lotus dealership in Grimsby as a Demonstrator car and the link with Lincolnshire began. Publicity photographs taken at Louth Golf Club were used in an article in the local paper and for the car’s sale. A Scunthorpe man, Barry Collen, bought the two seater in September 1976 and kept it for just two years. The list price for the car was £7,883. After many repairs the car was finally bought back by Lotus who kept it for a year. The next owner was Mr Rudd from Great Yarmouth, who worked in the gas and oil industry offshore. He moved to Aberdeen to work and the car arrived in Gordon’s home town. During Gordon’s ownership of the car, almost everything has had work done to it, including reinstating the original interior before the Lotus Festival at Brand’s Hatch in August 2013 and an engine rebuild last year.

Gordon has a copy of the original publicity photograph and for several years dreamed of recreating the photograph which had been taken by Keith Horsewood, a Grimsby photographer. This year Gordon wanted to mark the car’s 40th anniversary and since January has searched for the original model. He has used Facebook and BBC Radio Lincolnshire to help him. Despite around 30,000 hits on Facebook he was unable to track down the model. At the end of July, Gordon transported the car to Silverstone for the Silverstone Classic meeting, taking part in the parade celebrating the Europa’s 50th and the Esprit’s 40th anniversaries. The parade was led by Gordon and his Esprit going up to 70mph.

The following day the car arrived once more in Lincolnshire, outside Louth Golf Club. Nikki Barnard, the owner of a vintage shop in Woodhall Spa arrived bringing a 1970s fur coat, hat and flares for a model to wear. Her sister was one of the models used for the photograph, along with girls working in the Golf Club and Gordon’s girlfriend Carlene. A local wedding photographer, Eddie Evans, came to offer his assistance on the day reconstructing the original photograph.

The original owner, Barry came to Louth for this special event, not having seen the car since 1978. He recounted stories of his ownership and had the opportunity to sit in it once more. Barry commented that the car looked just as it had done the day he bought it. After all the photographs had been taken, Angela Bradbury, daughter of the High Cliff Motors garage owner Kazik Fabianski, arrived. Angela brought unseen photographs of the car at Louth, the garage and her father, all of which Gordon was delighted to see. Angela recounted stories of when the Lotus was at the garage, adding to Gordon’s knowledge of the car’s history. In liaison with Gordon and Lotus, Corgi developed and produced a limited edition 1:43 scale model of the LFU 972P Lotus Esprit in 2014 and Gordon now owns the first limited edition Corgi car, which he had brought with him.

Driving back to Aberdeen in his well loved and unique car, Gordon feels it is a privilege to own and drive the Lotus. Although daunting to be driving so close to the road when travelling on today’s busy roads, where the car barely reaches the top of a lorry’s wheel, this is a car that Gordon will never part with until he passes it on for his son to enjoy. The original newspaper article from 1976 claimed ‘Your Dreams Come True’ at High Cliff Motors. After owning his Esprit for thirty-three years, I am sure Gordon will agree that his boyhood dreams did indeed come true.