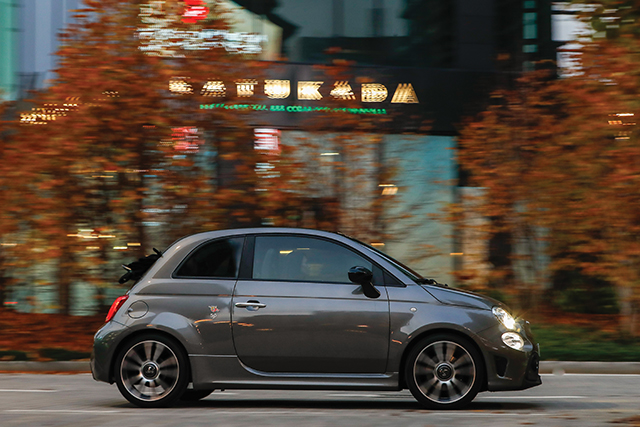 Abarth’s history and its logo are intertwined with its sporting victories, which began very early on. The first was a category victory in the famous ‘Palermo-Monte Pellegrino’ hill-climb in 1950 with Tazio Nuvolari at the wheel of an Abarth 204A. In 1954, Carlo Abarth decided to complement the logo with the introduction of a two-tone shield, the emblem of victories in sporting battles, as the background for the Scorpion.

In 1971, Abarth was acquired by Fiat and the Italian flag appeared on the logo in the background behind the word Abarth to underscore its Italian character.

The commitment to racing continues to this day, both on track and gravel. On track, Abarth is the engine supplier of the Italian and German F4 Championships, the training ground for the F1 champions of tomorrow and in rallies, the Abarth 124 rally will be the protagonist of the FIA-ERC, the European Rally Championship for the third year running in 2021.

Thanks to the Abarth values of performance, style and agility, commercially the Scorpion brand has been a success, particularly by increasing its market share by 50% in 2020 versus 2019.

Abarth has launched the new 2021 range with the 595 Turismo, Competizione, and Esseesse versions. Four different trims, all united by the typical features of the icon of sportiness: driving pleasure, high-adrenaline performance, and exhaust roar. New colours and new details are also available, like the exclusive leather seats. To pay homage to its history and rally racing successes, the new matte Blu Rally paintwork of the new 595 Competizione hints at the Fiat 131 Abarth Rally of the 1970s, while the new 17-inch alloy wheels are a nod to those of the Lancia Delta Rally Integrale of the 1990s.