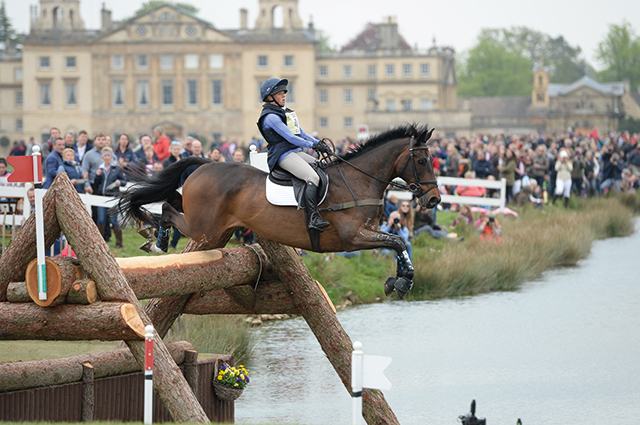 As the best placed Brit at this year’s Badminton Horse Trials, eventer Ros Canter’s star is truly on the rise and now she’s hoping for further success by securing a place in Team GB for the European Championships later this year.
Ros, who hails from Hallington, near Louth, is delighted with how things have finally started coming together for her after she finished fifth at the prestigious event, which was held at the beginning of May, on 12-year-old Dutch bred gelding Allstar B, owned by Caroline Moore.

The ambitious 31-year-old is now looking to the future of both her own training business and the business of securing herself a place at the 2020 Tokyo Olympic Games.

“Badminton was the biggest and best result I’ve had so far,” said Ros, who has represented Great Britain on the Nations Cup Eventing squad numerous times.

“It’s a much bigger stage for me and hopefully it’s put me in the eyes of the selectors for the senior Europeans later in the year – that’s always been the aim.

“Regarding my long-term future I’m looking towards the next Olympic Games in 2020 too.

“I went to Rio last year with the Ambition Programme for a look behind the scenes. It’s still four years away, and obviously horses have a risk of getting injured just like us, so it’s all about having the right horse at the right time and making sure I have enough horses coming through.”

Ros, who grew up on her parents’ arable farm in the Wolds, where her own business is now based, has always been a keen horse rider.

Her childhood was spent riding round the farm with her parents and two older sisters and she was an active member of the South Wold Hunt North Pony Club, producing her ponies from an early age. Silver Curtis was her first horse and he set her off on the road of affiliated eventing.

“We always rode, it was just something we did growing up together,” recalls Ros, who competes solely in eventing, which combines the three elements of dressage, showjumping and cross country.

“We did lots of other sports as well, but I always loved riding. Silver Curtis was an unsuitable buy but the William Curtis stud is local to us and he rather fell in to our home! After a couple of years with Silver very definitely in charge he became a fantastic horse for me. We were shortlisted for the junior team and completed our first advanced together.”

Ros continued riding while completing her sport science degree at Sheffield Hallam University as well as playing first team hockey, but admits the pressure of trying to do everything well led to some poor results and a loss of enthusiasm.

After finishing her studies she took some time out and went travelling with friends to New Zealand, Australia and Thailand and on her return set about finding work to fund further overseas trips.

“At that point I quite liked the idea of going off travelling and doing a bit of work abroad,” adds Ros, who is sponsored by Lincolnshire firms Lincoln Emerald Green Seeds, of Bardney, and Top Crop Haylage, from Spilsby.

“I needed to earn some money to do that, so I asked Judy Bradwell, the lady who I was doing dressage with, if she knew anyone who would take me on.

“She had a few horses she was training but didn’t have the riders for them, so offered me some work and a supposedly short-term summer job with Judy turned into four wonderful years.

“I gained experience on a number of young horses, with highlights including finishing runner-up in the Six Year Old World Championships at Le Lion d’Angers when riding Aprobanta and winning the Four Year Old Burghley Young Event Horse Final and the Lycetts Four Year Old Championship in the same year with Cekatinka.”

At the end of the 2011 season Ros decided to establish her own business at her family’s farm alongside her mother’s livery business.

“I was working ridiculous hours and it got to the point that I had enough horses at home to make a living out of it, so now I train all the horses I compete from my base and I ride a couple of my own horses, but others mainly for owners,” she explains.

“I am incredibly lucky to be based here, with such supportive and forward thinking parents. Mum not only spends hours every day helping me but she has developed her livery business and so our facilities are superb.”

In the last few years Ros has had many successful outings as part of the Great Britain Nations Cup team and, in 2015, she rode Allstar B at Burghley for the first time, where the pair won the prize for the best British first-timers.

Last year Ros, who is funded by British Lottery and UK Sport, travelled to Rio as part of the Ambition Programme for a look behind the scenes at the Olympic Games.

“As an elite athlete and potential Olympian they give me funding and training,” she explains.

“I was taken to the games to get a feel for it – we got to have a look around the Olympic village and behind the scenes. Normally we stay in the trailer, off site if we’re away and we’re separate from the other sports but at the Olympics it’s not like that, everyone is together. It was a great experience.

“The next four years are going to be hard, but thankfully things are going really well at the moment so that’s what we’re aiming for.”

To find out more about Ros and to keep up to date with her progress visit her website www.roscantereventing.com