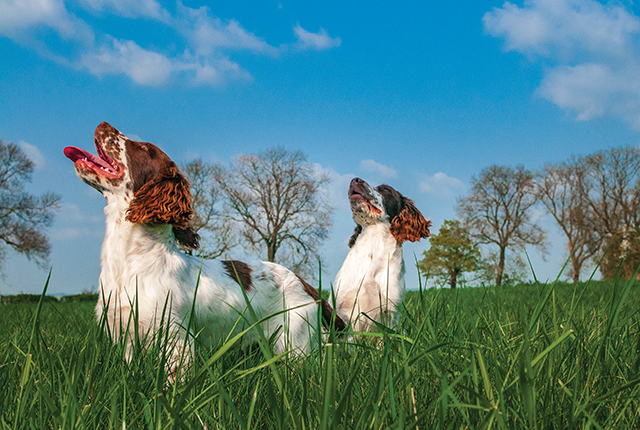 Are you lungworm aware?

Matt Limb OBE looks at the growing threat to our dogs from lungworm, why it is fast spreading across the country and how to identify the common symptoms.

With the shorter days and longer nights behind us and the days generally becoming warmer, we can look back on winter. But as someone commented to me the other day, it doesn’t feel like we had a real winter. Yes we had a few touches of frost, but I can see his point, with the mild and wet days we saw.

The early tell-tale signs of spring are on their way, snowdrops in abundance and generally earlier than expected, again maybe pointing to a milder than average winter. It’s that time of year when you want to spend more time out walking with the dogs, as you start to see the undergrowth and hedges come back to life, as the early rich grass grows fast, just in time for lambing and what I always see as the true start of the year.

But with the spring growth and inevitable wet, then the warm spells of weather, we will also see an abundance of slugs and snails in the grass, which serve as a timely reminder to be aware of an awful parasite that dogs can pick up from them; an infection that dog owners appear to be far less aware of than distemper and parvovirus, which are protected with your dog’s annual booster. I’m speaking of the parasite lungworm.

Lungworm can be fatal to dogs and recent reports show an increase across the country with regular infections and sadly fatalities being reported.

Once an extremely rare condition across the British Isles, lungworm is becoming widespread, with a high number of cases particularly in the south of England, and others identified in Wales and the East Midlands. Thankfully, unlike many canine diseases, lungworm cannot be passed from dog to dog; the parasite, or worm, needs slugs and snails to act as host to survive.

The lungworm infection is caused by a parasite called Angiostrongylus vasorum, whose larvae are carried by slugs and snails; dogs generally become infected when they eat them. Additionally, they can become infected by eating grass, drinking from puddles or even water bowls that have been left outside. The lungworm larvae are found in the slugs and snails’ slime trails and can survive for up to two weeks in damp conditions.

Once the larvae are digested, they mature and eventually end up in the dog’s lungs. The worms will then lay more eggs which again develop into larvae, which are often coughed up by the dog, or they are swallowed and are passed in the dog’s faeces, which can infect more slugs and snails – and the process is repeated.

The increasing cases of lungworm are thought to be a result of foxes contracting the parasite and then spreading it across the country. Recent research has suggested that the infected UK fox population may have doubled in the past decade to almost 20 percent, but it could be double that in the south of the country. Any dog can become contaminated with lungworm, but it is no surprise that younger dogs are most likely to be infected. This has been put down to their curious manner in exploring and picking things up, putting them at greater risk. But dogs of all ages and all breeds can be infected.

One of the major problems with lungworm is that it can easily be confused with other illnesses, so I can’t stress highly enough how important it is to consult your vet if your dog displays any of the common symptoms. These include changes in behaviour including lethargy and seizures. Or the more obvious one of breathing problems and regular deep coughing, along with a loss of weight and a poor appetite plus vomiting or diarrhoea.

Other symptoms come with poor blood clotting from wounds, nosebleeds and signs of possible anaemia with paleness in the gums.

But it is not uncommon for a dog to show just one of the symptoms – they may even show no symptoms in the early stages of infection.

Thankfully it is possible for your local vet to test for lungworm with the results available quickly and the infection can be treated, which is aimed at killing the worms in the dog’s body. If caught early enough, most dogs will soon make a full recovery.

A recent search on the internet found a lungworm map that displayed the known infections in my local area. It was a little worrying to see over 100 infections locally, within a radius of just 50 miles, but given there is no requirement to report cases this number could be much higher.

At home and around the kennels we have started a regime that in the evening all water pots, food bowls and even training dummies, tugs and toys and the like are picked up and put away in a place where there is no risk of them being infected by a slug or snail sliming over them.

Add to this a renewed effort to reduce the number of slugs and snails, which will also help with the garden. Finally, when away from home, stopping the dogs from drinking in puddles (maybe one of the easiest ways of becoming infected).

But I think I might struggle to stop them eating grass or scurrying in the undergrowth and hedgerows – they are spaniels after all.

I believe that one of the strongest defences we have as dog owners is an awareness of lungworm; how it is transmitted and what the common symptoms are, for I fear it is a parasitic infection that will continue to increase in the next few years – and that basic knowledge may just save your dog’s life.