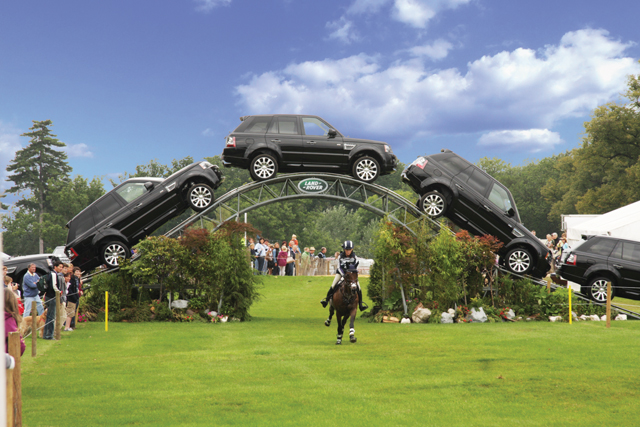 From the building of cross country fences and arenas, putting up marquees and grandstands to installing electricity, telecommunications and water, organising The Land Rover Burghley Horse Trials is a huge task.
It is only when everyone else is finished, however, that one team can really get to work – to add the finishing touches. No one could fail to notice the results; the bold floral adornment of cross country and show jumping fences, the pots in the dressage arena, the trees around the bandstand, trade stands and the beautiful pedestal and floor arrangements in the hospitality and Members’ Marquees are all the work of the company Hanging Garden Ltd.

Each year the job at The Land Rover Burghley Horse Trials is a trip back to his roots for company director, Nick Kirby, who was born in Stamford. The horse trials, although just up the road, were not a feature of his early life and it is only in the last ten years that the company has come to embrace this particular sport, and Burghley was the very first horse trials they worked on.

“At the time we got the job it was very different to anything else we were doing and the year before we went just to have a look,” said Nick. “The main difference is that we have to consider health and safety, especially with fence dressing – as well as being pretty, they have to be safe for riders and horses – and therefore require more thought.”

The time spent thinking was worth it. Such has been the appreciation of their trees, flowers and plants since that first year, that in 2012 they provided the floral decoration in the Olympic equestrian stadium at Greenwich.

The scale of these events and others like it – their task list also includes Wimbledon, Ascot and Silverstone – means the company now employs twelve people and often brings in part-timers to help carry, arrange, water and look after the contents of the half-dozen lorries plus various vans and trailers that are required to bring the greenery, planters and decorations to Stamford.

The location, with its backdrop of the Elizabethan house, tends to influence their choice of style. “There are always fashions and fads in flowers like anything else,” said Nick. “We try to change and modernise through the use of containers – for example we are using more galvanised planters – but some fashions, such as Perspex are too modern for the country house tradition of Burghley, although we did use under-lit planters in the Members’ Marquee last year.”

Many arrangements and the flowers in them are specifically selected to pick out the corporate colours of sponsors. Last year, green chrysanthemums and dark blue agapanthus were used to great effect to complement the Land Rover logo.

Nick said: “In general the main problem with a September event is seasonal colour. We do a lot of planting in advance and although artificial plants and flowers do go against the grain I have learnt from experience that they serve a purpose. The quality of modern artificial is so good – from the grandstands you certainly can’t tell – and they do provide blocks of colour which are especially valuable in a large show jumping arena.”

So what can the keen gardener expect to see as they walk around at this year’s Horse Trials?

Nick, who travelled to Italy to buy his stock for the season, said: “There will be lots of buxus topiary – balls, cones and spirals – and also various shapes of photinia red robin which is currently popular.”

At the end of each season much of the stock is sold for permanent planting schemes, although not all will make it. “At Burghley, possibly because the riders are the best, the casualty rate is quite low – we seem to lose more at Gatcombe – but that is part of the job and you know it will happen,” said Nick who despite the hard work involved always enjoys working on event.

He added: “Burghley Horse Trials has something special about it – even in bad weather. There is a good rapport among all the suppliers and contractors and everyone helps out and even though there is a lot of stress everyone deals with it in a good way. And for us, once all the work in the show jumping arena is completed, on Saturday night we can have a bit of a party.”

The Burghley party marks the end of another season of potting on, pruning and preening for Hanging Garden Ltd but it isn’t long before the planting and preparation for next year’s event begins all over again.

The Land Rover Burghley Horse Trials takes place 5th–8th September – for further information about the Trials and to book your tickets go to www.burghley-horse.co.uk