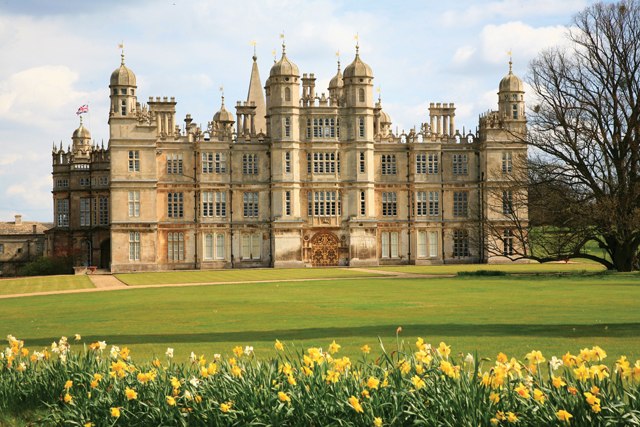 Back to the future

There are changes afoot in Burghley Park and regular visitors to The Land Rover Burghley Horse Trials might have noticed something different by the lake this year.
They would have been right, as old deer fencing, along with shrubs and trees, have been removed. The view between the house and the lake is now uninterrupted, as was intended when landscape architect Capability Brown created the twenty-five-acre lake between 1775 and 1780.

The clearance was initiated after a trip to Stamford museum by Peter Glassey, head of forestry, park and gardens at Burghley. He explained: “I saw a photograph that had been taken in 1904 prior to the fence being there.” Glassey showed the picture to the present Burghley châtelaine, Miranda Rock, who made the decision to return the view.

Further work is planned. “Where we can we are looking to return the landscape, as many of the original views and vistas have become obscured,” said Glassey whose next project is to clear land at the west end of the lake. “This will further open up the park and as an aside will also mean better viewing at the horse trials,” added Glassey, who has worked at Burghley for twenty years. “I am a very lucky person – I love the variety of work as well as the challenge of trying to manage, conserve and enhance the landscape.”

London and Wise were commissioned by John Cecil, the Fifth Earl of Exeter also known as the ‘Travelling Earl’. As well as filling the house with treasures brought back from Italy he commissioned the planting of the avenues, as was the continental fashion of the time. “The North Avenue is a London and Wise planting consisting of two Dutch clones of the Common Lime,” said Glassey. “One is called ‘Pallida’, a rather messy tree, with a profusion of epicormic growth on the trunk, but which is compensated by the amount of flowers it produces in July. The second clone, ‘Burghley Tall’ is a much more impressive tree achieving heights of forty metres, with a clean stem and a wonderful billowing crown. It has duller leaves, however, and flowers less profusely. London and Wise also used sweet chestnuts in their avenue plantings and we have many magnificent survivors in the park today.”

Brownlow Cecil, the Ninth Earl of Exeter employed the fashionable Capability Brown who, as well as creating the lake, ‘chopped holes’ in the avenues to create views and planted circular woodlands to hold game. Many of the trees that he planted remain – predominantly the English Oak and the Cedars of Lebanon by the lake. Although, the oldest tree in the park – an English Oak in the south park estimated to be 800 years old – is part of the original wood pasture that preceded the park and house.

Tree planting is a constant. This year alone, as part of The Woodland Trust’s initiative to celebrate the Queen’s Diamond Jubilee, 25,000 native hardwoods have been planted to create a fifty-acre wood and public riverside walk to the north of Burghley House.

“Fortunately I get the huge satisfaction of seeing small trees grow,” said Glassey explaining why he doesn’t mind not seeing all his labour come to fruition. “I would like to think I will leave the place in better condition for the next person.”

Miranda Rock, of course, has a major role in shaping the future of Burghley Park. “I think there is a danger in people wanting to leave their mark and therefore making decisions for the wrong reasons,” said Rock who admits to being a ‘great disciple of Glassey’. “Decisions are now science based and I prefer to go slowly and cautiously. I’m more for conservation and preservation.”

Preserving the Park in the twenty-first century presents a continual challenge. Many of the trees are old while many new diseases threaten longevity. Glassey said: “There is always much to do in trying to save the heritage and leave a succession. Trees fall apart – it’s part of the aging process – but we try to anticipate and fell for both disease and safety.”

Visitors, whose safety is paramount and who are both welcome and vital for the future of the park, are also known to create problems – particularly through compaction. Car parking close to trees is now avoided. Glassey explains: “Ninety per cent of a tree’s roots are in the top two feet of soil, so we aim to counteract compaction with aeration, mulching and compost tea applications; this aims to restore a healthy rooting environment for a tree under stress.” This, however, creates more ongoing labour and cost for the estate.

Miranda Rock added: “Visitors are important to us but we also have to preserve the house and our historic legacy, so there is always a fine balance. But always we have to think long-term and I would be pleased if our legacy meant that the park and our environment are preserved as best we can.”