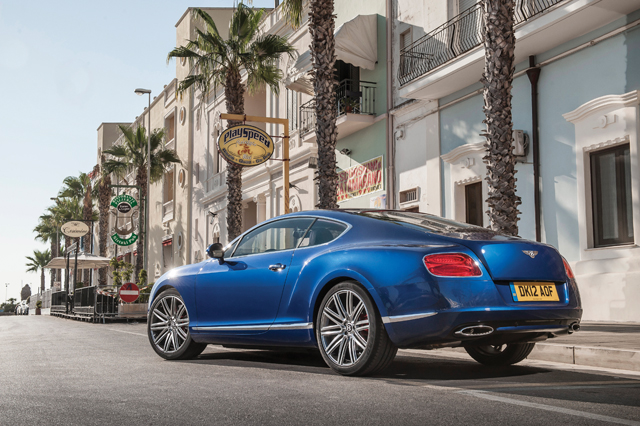 Beyond question, the legend of the Bentley name was founded on the drama of its racing history – for a magic has built up around the marque and its triumphs. They stretch back to Woolf ‘Babe’ Barnato’s (the greatest of Bentley drivers) Le Mans victories and other battles long ago, when the ‘Bentley Boys’ reigned supreme.
Every now and then certain motoring dreams come true and have every motoring enthusiast salivating. Words cannot do justice to automobiles that, not so much tick all the boxes, as blast redundant superlatives into the past tense.

The new Continental GT is not only achingly attractive to look at and comfortable to sit in, but it has the capacity to devour roads like a sultan of suavity scything through the preconceptions of hidebound conformism. Cocking a snook at mundanity and insisting that the very best is the only way, it does so with all the evident taste and discernment of world class ‘connoisseurship’.

There is no end to its impressive credentials. Most impressed of all, of course, will be the driver and passengers fortunate enough to imbibe at this fountain of felicity.

Now redesigned and re-engineered, this four seat all-wheel-drive £135,760 supercar, using a 6.0 litre, 567bhp W12 engine (there is a V8 version) and driving through a six-speed automatic ZF gearbox, will take you to the stars. Mere bystanders too will benefit from the beauty of the car’s appearance – provided of course that they are capable of turning their heads quickly enough to capture it in motion because it’s a near 200mph projectile.

A Continental GT is a car to aspire to – and why not? The best things in life sometimes come with a price tag attached despite what they say. It would be churlish not to welcome the arrival of such a car onto the scene. Considering it from every angle as it sits in repose, it’s difficult to imagine how its contours could be improved. Not a small car to be sure but a combination of perfect proportion, poise and exquisite taste in execution has produced a design that has that integrated ‘go-anywhere-swiftly’ appeal.

The interior represents a finely balanced juxtaposition of traditional ‘gentlemen’s club’ values and up-to-the-minute futurism. Elliptical contours overlap and interact to produce an effect that is very much now!

During my acquaintance with this beautiful car I was fortunate to be able to provide a modern business woman with a lift to the railway station. Need I say that train travel was soon forgotten as she pressed me to deliver her to her destination even if it was a sixty-mile detour. “Your wish is my command,” I responded with all the confidence of Ali Baba in possession of a thousand magic carpets. My companion wanted to prolong her acquaintance with the car and I too was eager to find an excuse to add on the miles.

Of course, when considering the Continental’s capability on the road one has to bear in mind just how incapable many of our roads are of meeting the needs of such a car.

If you haven’t experienced the sensation of driving a car that’s so good and so capable that its limits are, frankly, unattainable, let me impress upon you that the Bentley experience, compared to an ordinary car, is like the difference between a bow and arrow and a moon rocket. Comparison just will not do because we’re talking about a new dimension here. Imagine a car that’s as quick as can be, as comfy as can be, as grippy as a planetary magnetic pole and as silent and accommodating as a luxury seat at the opera – and you’re not even halfway there.

It stands as a design icon; a sculpture that symbolises all that’s good about motoring. It’s a symbol of luxury, of style and excellent construction. Even stationary it shouts out strength and speed and is testimony to the efforts of the designers and workers.

Was there ever a car more deserving of the name Continental? It makes one long for voyages across Europe and beyond.