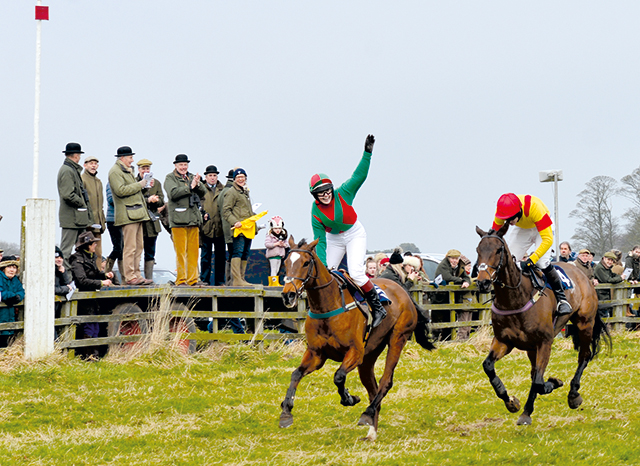 Held at Brocklesby Park on Saturday 17th February 2018 by kind permission of the Earl of Yarborough.
The course at Brocklesby Park is left handed and mainly flat, with the going on this day being good to soft and the weather being thankfully kind. The Brocklesby races are seen by many as a wonderful old-fashioned, and very traditional Point-to-Point and it was good to see that it is still popular with both young and old, resulting in a great crowd of racegoers enjoying a good field of top quality horses. Fifty-eight runners provided some excellent racing, and some thrilling finishes.

The first race of the day at 12:00 was The Brocklesby Hunt Members, Subscribers & Farmers Race, sponsored by DDM Agriculture, and saw Starlight Court (IRE) ridden by Miss C Pickering at 2/1 take an impressive win. The favourite, Somethingwonderful (IRE) ridden by Tom Strawson at 4/5F, came second and Golans Choice (IRE) ridden by A J Marshall at 9/1 taking third place. A breathless winning jockey explained that, as an accountant, she relies heavily on her father Adair for his training skills, for which she is very grateful. She will follow up this maiden victory with a run at Revesby Races, if everything goes according to plan.

The 12:30 race, The PPORA Club Members Conditions Race, sponsored by Clark Weightman Chartered Surveyors, had a field of ten runners. Kings Lodge (GB), ridden by Will Easterby, more or less led throughout and took first place at 9/1 with Maguires Bridge (IRE) ridden by Tom Strawson at 11/4 again coming second after trying to challenge Kings Lodge on the run in, but couldn’t find that extra bit to overhaul the impressive winner. Rendezvous Peak (GB) ridden by W Biddick at 14/1 took third place.

The 13:30 – The Connolly’s Red Mills Intermediate Race, sponsored by Connolly’s Red Mills – had Duhallow Tornado (IRE) finally give Tom Strawson not only his first win of the meeting at 13/8F, but also his third win from three outings. Dynamic Island (IRE) ridden by R Bevin at 7/2 came second and Bingo Star (FR) ridden by Jack Andrews at 7/2 took third place.

The penultimate race, the 14:30, was The Jockey Club Open Maiden Race – For Mares And Fillies Only and was sponsored by The Jockey Club and St Hugh’s Hospital. Bene Regina (IRE) gave Tom Strawson at 7/2 his second win of the meeting, with Hattie Hopkinson (IRE) ridden by Tommie O’Brien at 6/4F coming second and Dina Maker (FR) ridden by Will Biddick at 5/1 taking third place.

The last race of the day at 15:00 was The Open Maiden Race. Port of Mars (IRE) ridden by Tommie O’Brien at 2/1J came first beating by three lengths Redmond Hall (IRE) ridden by Will Biddick at 4/1 and Jamars Star (GB) ridden by Sam Burton at 28/1 some way back to take third place.