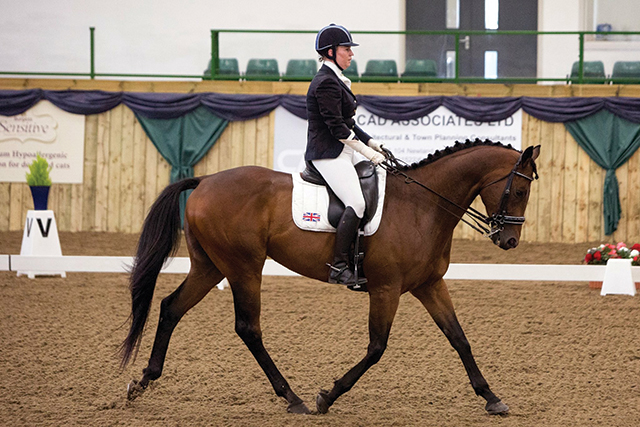 Building an equestrian partnership and friendship

A former Royal Ascot winner has been transformed into a successful para-dressage horse under the tutelage of Lincolnshire rider Julie Frizzell, who now hopes the pair can go on to compete at international level together.
Namibian, who comes from the Godolphin thoroughbred and horseracing team founded by His Highness Sheikh Mohammed bin Rashid Al Maktoum, vice president and prime minister of the United Arab Emirates and ruler of Dubai, won the 2011 running of the Queen’s Vase at the Royal meeting.

Julie was introduced to the eight-year-old gelding through the Godolphin Rehoming Centre, Newmarket, and now barely a year after starting his new career, Namibian has qualified for the Para-Dressage Winter Championships taking place in March.

“With qualifiers few and far between, my aim was to try and get him qualified as early as possible. But to have achieved that by November from just three shows was, to be honest, a bit of a pleasant surprise!” says Julie, who served in the RAF for twenty years.

“Each time I ride him, he never fails to surprise me. He’s a very quick learner and quite an impatient one too, but this whole process has been a learning curve for both of us.”

Julie splits her time between leadership and management consultancy work and running Dressage Coaching UK, which specialises in providing a professional level of coaching to those who ride for pleasure, and has always been passionate about horses.

She grew up in a north-east mining village, where her mother took a second job so that she could start riding lessons when she was seven years old.

“There weren’t many pony clubs around the mining villages, but from the ages of 7 to 15 I went to the local riding school once a week and from the age of 11 I worked there at the weekends doing all the dirty, horrible jobs just so I could be around the horses.

“I didn’t own my own until I was in my twenties, when I could afford it,” says Julie who is based near Bourne.

“I have no idea why I’m drawn to them so much – it’s a passion and has just gone from wanting my own pony, to being able to ride it and enjoy it, to competing and then realising that I wasn’t too bad, so going into it as a sport.”

During her time with the RAF, where she rose to the rank of Wing Commander before retiring on medical grounds, Julie competed in many eventing and showjumping contests.

It was while riding at the Defence Animal Centre that her wrist was crushed in a fall. Subsequent surgery failed to repair the damage and in 2012 her ulna, the main forearm bone, was removed altogether.

She now rides with a thermoplastic cast to keep her hand in place and was encouraged to apply for para-grading, which resulted in her being ranked grade four at the end of 2013.

Two years later when her long-standing dressage mount Crazy Diamond was approaching retirement, Julie decided to look for a replacement and was recommended to try the Godolphin Rehoming Centre.

“A client on the south coast had a beautiful horse, who it turned out had come through the centre’s programme,” she recalls.

“I went on the website and the following morning I had a phone call from the programme manager Jo Brisland, so we arranged to visit the stud and I was introduced to Namibian.

“These horses have given Godolphin their lives and they want to return that – and that ethos really struck a chord with me.

“One of the programme riders rode Namibian first and then I got on. He felt green, wobbly and young and when I asked for a canter he had a right Royal buck and squeal. But importantly, I never felt unsafe and soon it became clear he loves his work.

“At the outset I can only liken it to trying to get the QEII yacht to waltz! However, his ability and trainability are superb. He is the most intelligent horse I have ever sat on.

“He does occasionally lose the plot if he doesn’t understand something immediately. It’s like he wants to be at the top of his game, irrespective of what that game is. He is a proper diva, loves attention and is truly happy when he is working. I swear this horse smiles!”

Namibian shares both the same sire and place of birth as the Derby and Arc winner Golden Horn, being a son of Cape Cross and having been born and raised at the Hascombe and Valiant Stud.

A progressive three-year-old in 2011 when trained in Middleham by Mark Johnston, Namibian followed up his victory at Royal Ascot with the defeat of the subsequent Melbourne Cup winner Fiorente at Goodwood.

However, a bout of colic and another setback led to two years off the track and then an unsuccessful spell hurdling, after which he was moved to Newmarket to begin his retraining.

Namibian only started competing on the para-dressage circuit last March, but by July had already been selected for the Concours Para-equestre de Dressage International 1*, where horse and rider are required to have averages of sixty-four per cent and above in specific tests to even be considered by the selectors. To date he has finished in the top four in every test he has done.

“To come from racing and turn to dressage is one thing, to turn to para-dressage at international level is another and it will take time,” says Julie.

“My initial aim with him is to contest the national titles that I won on Crazy Diamond and to be selected to represent Great Britain at 1* and 2* level. Developing him up to advanced dressage levels is ambitious but I am in no doubt he has the brain and athleticism to do it.

“Whether today or ten years from now, my goal is ‘that feeling’. That feeling of sitting on a horse who is happy to work and happy in his work, the friendship and the partnership is the priority. To then be able to show that in a competitive arena is just a bonus.”

For more information about Retraining of Racehorses – British Horseracing’s official charity for the welfare of horses that have retired from racing – visit www.ror.org.uk