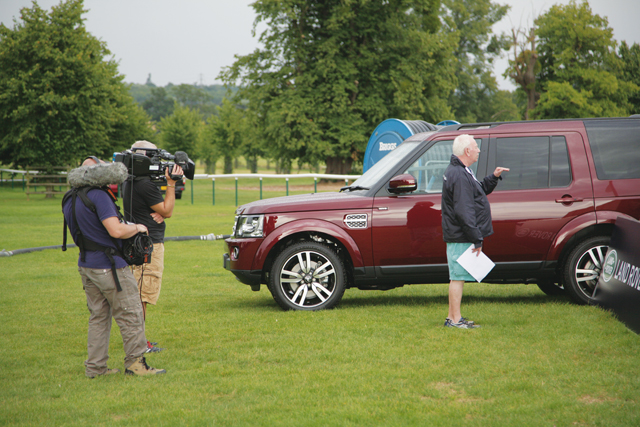 Burghley on the BBC

Since the early 1990s David Goldstrom and his twenty strong Television in Europe Ltd production team have woven together the unfolding story of The Land Rover Burghley Horse Trials (3rd–6th September). The team work to compile the story of the four days of competition into a two-hour show broadcast by the BBC.
It’s a formula that the team pioneered in its quest to widen the appeal of both Land Rover Burghley and the sport of eventing. Today the annual Burghley Horse Trials continues to be the company’s UK flagship programme, broadcast in regions across the world including Europe, Asia, America, Australia, South Africa and New Zealand.

With the similar competition format that the Event follows from year to year, the challenge is to bring a fresh approach to the programme and in particular to the coverage of the cross country centrepiece designed by Captain Mark Phillips.

“Starting early in the year, we work closely with Mark to ensure that we pictorially translate the highs and lows of the sport that he poses to some of the world’s top event horses and riders along their six-kilometre cross country journey – a journey that is universally regarded and respected as being one of the toughest of its kind,” explains David.

This year, on Saturday 5th September, fans attending the Event and viewers alike will witness a new twist, with the first complete reversal in the direction of the present cross country track since 2006. The track that was once downhill will present a new challenge to the eighty horse and rider
combinations, of conserving enough energy to complete the course thanks to the incline they will experience as they ride around the forty jumping efforts.

“From the television perspective we will still lay some twenty-six kilometres of television cables to secure the footage we need as in previous years, but where horses and riders were naturally lit by the prevailing light source in the past, we now have to plan our twenty plus camera positions at famous complexes such as Capability’s Cutting and the Land Rover Trout Hatchery to avoid competitors appearing in silhouette,” says David.

Finding the ‘right line’ is as crucial for David and his team as it is for the rider. Following Captain Mark Phillips’s official course walk or eavesdropping on conversations as competitors walk the track numerous times before cross country day is how the Television in Europe team fine-tune their plans to give the viewer the best possible coverage.

“Innovation in coverage is always on the agenda but you’ll have to watch the show on Sunday 6th September (on BBC2) to see what we come up with for 2015! One thing we can give away is due to noise and safety questions surrounding the increasingly popular drone cameras, they will not be part of this year’s competition coverage,” explains David.

Complementing the broadcast coverage is the unique and progressive insight provided by www.burghley.tv. The online streaming service offers the opportunity for fans to select and view the dressage, cross country and showjumping performances of every participating horse and rider. The fence by fence pre-competition cross country preview with Captain Mark Phillips provides viewers with a fascinating explanation of the thinking behind the course’s design.

The comprehensive coverage served on burghley.tv gives viewers the opportunity to watch each rider’s dressage test, including an immediate reaction to their performance on exiting the arena, 8-9 minutes of cross country coverage and the decisive top 24 showjumping rounds, which are available immediately after the BBC transmission on Sunday 6th September.

Performances can be reviewed, replayed or analysed at a time to suit the user along with the ‘Best of Burghley’ highlight programmes from 1990 to the present day. Over the past two years burghley.tv has attracted over 50,000 unique visitors and in excess of 450,000 video plays worldwide.

“Priority is always given to the production of the BBC programme and the visibility it brings to Land Rover as the title sponsor of the Event. Deciding the precise positioning of Land Rover’s advertising signage in both the Main Arena and cross country course takes a total of four hours,” says David.

On cross country day, the production team and technical crew swells to a team of seventy of the industry’s most talented individuals. Together they harmonise the footage to deliver a seamless programme – an effort that was awarded the Bronze Medal for the Best Worldwide Sports Coverage of the Year in 2013.

Supported by Stamford’s finest fish and chips, the production team work from 6pm on Saturday night to 8am on Sunday morning to produce the first ninety minutes of the programme; this then connects with the decisive live coverage of the showjumping phase of the CCI 4 star competition, maintaining the topicality of the competition of the BBC coverage on the Sunday afternoon.

“Unpredictability is an essential ingredient for all sports and as ever we’re always hopeful that every edition of the Land Rover Burghley Horse Trials will culminate in a nailbiting finish. That’s not something within our hands, but each year we collectively look to raise the bar in the programming for which we are responsible,” states David.

“It’s quite something, today, for an independent company to hold a broadcasting contract for such a time,” explains David. “Our format has earned the airtime that Burghley so richly deserves while providing a blueprint for the worldwide coverage of the sport. This is something we can rightly be proud of.”

Secure your tickets for The Land Rover Burghley Horse Trials (3rd–6th September) now by visiting www.burghley-horse.co.uk or call the Box Office on 01933 304744.