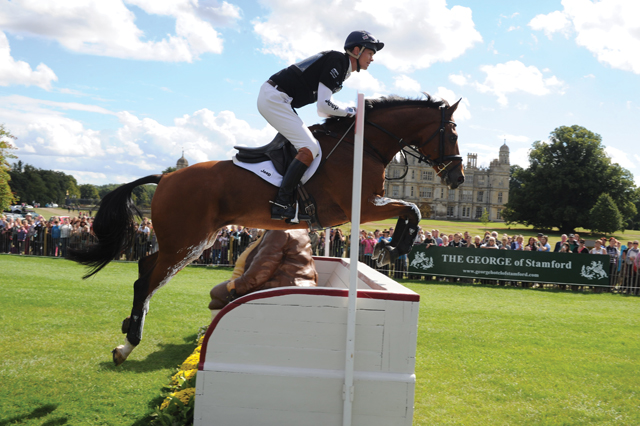 With over 160,000 visitors, 600 plus trade stands, eighty top international competitors and a prize fund of £225,000 this year’s Land Rover Burghley Horse Trials will be a far cry from the inaugural event, which took place within the magnificent parkland of Burghley House in 1961, more than fifty years ago.
Eventing came to the estate as a fortuitous accident after the Marquess of Exeter, a keen equestrian, heard that the three-day event at Harewood was to be cancelled due to a suspected outbreak of Foot and Mouth disease. He generously invited the British Horse Society to transfer the event to his estate and the resulting competition was deemed a huge success.

Burghley has always had equestrian links, initially centred on racing – there was a racecourse at Stamford in the nineteenth century, which eventually fell into disrepair – and hunting. The Burghley Hunt, formed as a pack of harriers, was disbanded in 1967. However, in the early days of the horse trials, it was traditional for competitors to go cub hunting on the Saturday morning with Lord Burghley’s hounds.

The first event attracted 12,000 visitors, to watch nineteen starters, of whom nine completed. It was deemed a triumph and in 1962 Burghley Horse Trials was invited to host the FEI’s European Championships. This was the beginning of a remarkable record – no other horse trials site has staged as many championships – a record ten in all, including the first World Championships in 1966.

Today the event has become one of the most popular and highly regarded within the equestrian calendar and ranks within the UK’s top ten national sporting events by attendance. Burghley Horse Trials is also often voted a favourite event by the riders and is one of just six CCI 4* events in the world with Burghley considered as the most challenging.

Throughout the year, a small administrative team of just eight people work behind the scenes to plan and implement every element of the competition and event. The remit is huge; everything from building temporary stables for over 100 equine participants with an onsite veterinary clinic, to setting up members’ premium catering, serving over 5,000 lunches over the four days – all on a greenfield site.

The horse trials is recognised as much for its traditions as its innovations and success has been built on evolution rather than revolution. The complex infrastructure is continuously being reviewed and improved and recently the media centre has been upgraded to accommodate the growing band of up to 350 accredited journalists and photographers, who descend on Stamford each year to catch and report on the news and highlights of the Event. The shopping has developed and diversified with the recent introduction of a Green Lifestyle pavilion and an extended Foodwalk offering a mouthwatering selection of gourmet produce.

The digital age has seen the introduction of Burghley.tv offering unrivalled ‘video on demand’, now available all year round. Last year viewers from 137 countries took advantage of this unique and free service. Land Rover Burghley Horse Trials also has its own downloadable free App and social media is now one of the central ways in which visitors can access information pre, during and after the event.

Burghley Horse Trials has a long-established relationship with its title sponsor Land Rover, which stretches back more than thirty years. The company’s commitment to Burghley sees over sixty of its vehicles supplied to officials for use during the competition. Visitors can try their hand at the Land Rover Experience ‘Terrapod’, which gives driving enthusiasts a chance to drive around a man-made track with an instructor at the wheel; travelling sideways on a thirty-degree slope, across simulated ice tracks and over huge potholes.

The event has also established Royal connections and has been visited by members of the Royal Family on many occasions, most recently in 2011 when HRH The Princess Royal attended the Event’s 50th Anniversary and presented the prizes. Princess Anne also rode at Burghley winning the European Championships in 1971. Her daughter Zara Phillips is in the unusual position of being the only child of two former winners to compete at the event; her father, Captain Mark Phillips, having won the event in 1973 is presently course designer.

Land Rover Burghley’s unique nature means that it attracts a wide range of visitors and an interest in horses is certainly not a pre-requisite. It is acknowledged as a key event in the English social calendar and the renowned ‘pop up’ shopping village really is unsurpassed. Having grown from the modest sixty-six stalls seen at the 1961 horse trials, the trade stands now encompass everything from exclusive fashion, jewellery and gourmet food products, to quality tack, stabling and ‘simply must have’ items for home and garden.

This year’s event will be unique because it will come hot on the heels of the 2014 World Equestrian Games, which are to be held in France this summer. It means we’re likely to see some, if not all, of the World Champion medallists crossing the channel to compete at Land Rover Burghley. Once again the beautiful Capability Brown parkland outside Stamford will be hosting the very best in equestrian sport and the most talented riders and horses drawn from across the globe.

For anyone interested in visiting Land Rover Burghley Horse Trials this year, the box office is now open, offering significant discounts to those who book in advance.