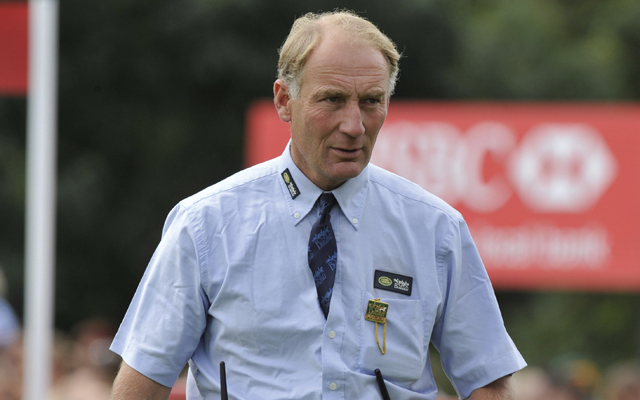 Clerk of the Course

Philip Herbert calls the Burghley Estate’s rolling parkland his home. His involvement with The Land Rover Burghley Horse Trials dates back to the early 1980s, when as a rookie professional course-builder, he was asked to lend a hand at the great event.
“I had been in charge of the cross-country course for the Pony Club Championships at Stoneleigh for several years when Burghley was on the lookout for a new builder to join the team – I was in the right place at the right time,” says Herbert, who calculates that he spends around half of his working life within the Estate boundaries.

“Back in the old days we didn’t used to start preparations until June or July. Now, we are on site at various points twelve months of the year,” he explains.

Preparation for the following year’s event begins straight after the gates close on the current one.

“We dismantle the portable fences and re-instate the ground. We also carry out any major groundwork at this time to allow the park the maximum time to recover,” he says.

Course-designer Captain Mark Phillips will visit Burghley in the autumn to discuss preliminary plans for next year’s course. Any fences that are not required next year are removed and the ground where they have been is turfed. Serious fence construction begins in May and June.

This year Herbert and his team, which includes his son Guy, have been busy constructing a brand new water jump on the cross-country course to mark the event’s fiftieth anniversary.

“We’ve had to relocate a whole army of white-clawed crayfish that lived in the lake as they are a protected species,” he explains.

The fence should be an exciting spectacle as it will require horses and riders to jump on and off an island in the middle of the lake.

The biggest revolution in cross-country course design has been in the use of portable jumps. Twenty years ago ninety percent of the fences were built in-situ; now they are constructed in the team’s workshop. Situated in the grounds of the estate, the big timber barn houses just about every conceivable tool and piece of machinery imaginable.

“Building portable fences gives us a lot more flexibility,” explains Herbert. “When architects design a building they make exact drawings on paper for builders to interpret, but course design and building is not an exact science. You can’t depict a cross-country fence on paper and the natural terrain has to be taken into account.

“Before, once we had banged in the upright posts and started building a fence in a certain position, there was no going back. Now we can keep making tweaks until we are completely happy.”

Preparing the estate for the horse trials is certainly no part-time job.

Of equal importance to the course itself is the ground. Although sheep and cattle graze the parkland throughout the year, the whole of the cross-country course is completely fenced off, apart from a small section which runs through the deer park. The grass is mown all year round to a length of about three inches, which provides a good cushion for galloping horses. It is also spiked with a vibrating aerorator, which allows any surface water to drain away.

It is obvious that Herbert takes great pride in his work.

“It’s a real team effort and although it’s hard graft, I wouldn’t be doing anything else,” he concludes.