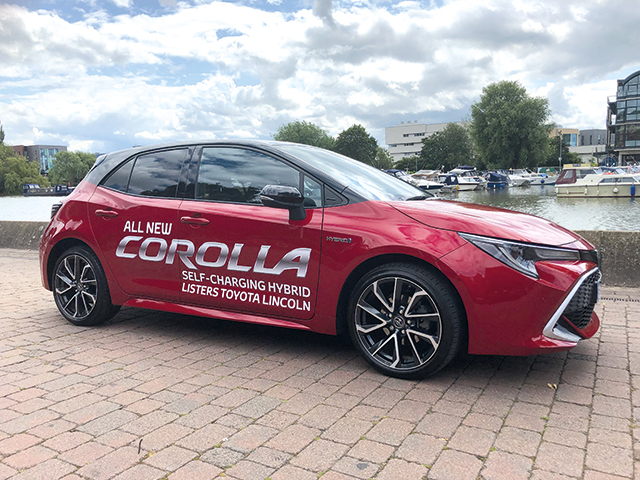 Lincolnshire Life road tested the new Toyota Corolla on the streets of Lincoln. It certainly turned heads and created plenty of interest when it was parked for photographs against the city backdrops.
It is good to see the designation ‘Corolla’ return. It conjures up words such as ‘reliability’ and ‘trustworthiness’, and now ‘eco-friendly’ will be added to the inventory. Why?

Well, the model is mainly being offered with electrified powertrains, including the 1.8-litre four-cylinder petrol-electric hybrid, under the spotlight here. The overall power is 121PS, pushing the automobile from 0-62mph in 10.9s and giving it an all-out speed of 112mph.

Efficiency is the motivation, with the Toyota doing around 55mpg to 65mpg, and releasing CO2 emissions from 73g/km. Behind the wheel, the Corolla in 1.8 hybrid semblance is a pleasure to drive; you can feel the chassis’ low centre of gravity, especially in corners where body roll is all but non-existent. It is also biddable on all but the most scarred of surfaces.

The Toyota is acquiescent around town, where a methodical driving manner will enable you to move about without using much more than a teaspoon or two of fuel. And, if you’re patient, the new Corolla becomes an unruffled cruiser at motorway speeds. Inside, there’s a bountiful amount of cushioned materials and a logical fascia.

The rear of the car is around the same as you’ll find in an Astra or Focus. There’s 361 litres of cargo capacity on the 1.8 Corolla, which, granted, is slightly bigger than the Ford Focus’ boot. Toyota has piled the new Corolla’s cabin with technology, such as an easy-to-read eight-inch infotainment system.

The modern Toyota Corolla is the best hatchback to come from the Japanese carmaker for ages. The build quality is excellent, and it delivers a comfortable ride, along with confidence-engendering handling.

Buyers will be be charmed by the model’s negligible CO2 emissions and resulting low running costs.