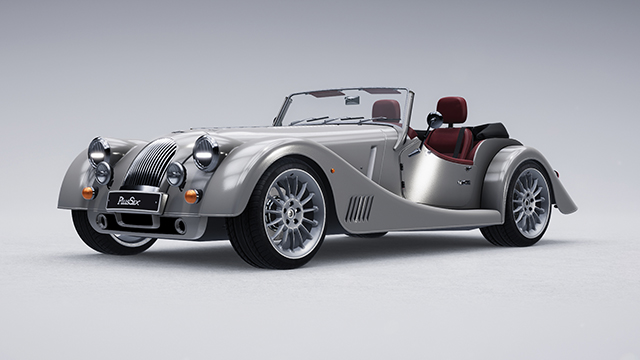 Create your perfect Morgan Plus Six in stunning photorealistic detail

The Morgan Motor Company has launched an immersive 3D online configurator for its newest model, the Plus Six. Featuring high-fidelity graphics and the Plus Six’s extensive range of options, it makes the perfect tool both for customers to finalise the specification of their car, and for enthusiasts to imagine their dream Morgan.
The Plus Six is the first Morgan to have been designed entirely using computer aided design (CAD), which has allowed the car to be modelled in the configurator with total accuracy. Combined with the integration of games development software and WebGL technology, it allows for a photorealistic 3D representation of the car. The user can move the car to view it from any angle, and even zoom in to view its features in detail.

Adding further graphic enhancement is the ability to visualise the car with the hood in both its raised and lowered position, with or without an optional hardtop fitted, and with the sidescreens in place or removed.

The configurator reflects the Plus Six’s extensive options list. Users can not only choose their car’s paint colour, wheel design, leather colour and texture, carpet colour, dashboard finish and hood options, but details such as its interior stitching colour and pattern, seat and hood piping, and wing beading colour. Even accessories such as driving spotlights and a luggage rack have been fully rendered and can be added to the car. In total, there are more than a trillion possible permutations.

With that many options, knowing where to start might be difficult, so Morgan has selected a number of ‘Inspirations’, which can be used as a starting point for a specification.

As users build their car, they are able to see the total price of their specification in real time, specific to their region, based on their location. Further broadening the configurator’s international appeal is its availability in three different languages – English, French and German – selectable at launch.

After completing the design of their Plus Six, users can download an image pack for sharing on social media platforms, download a full PDF brochure of their finished car, or save the URL to return to their specification at a later date. For those looking to turn their dream Morgan into a reality, there’s even the option to send the full specification list to a local Morgan Dealership.

The Morgan Plus Six configurator has been designed to run on desktop and laptop computers, and works best in the Chrome and Firefox browsers. There are three different quality options to best suit the performance of the user’s computer.

Michael Smith, lead digital designer at Morgan Motor Company, said: “We’re immensely proud to bring you our most advanced configurator yet. It’s the culmination of months of development work, bringing together teams across the business and externally. A highlight for me was working with the CAD engineers and designers to repurpose their work on the Plus Six. What’s been created is an extremely modern tool anyone can use at home or in a Morgan Dealership.

To try the configurator for yourself, visit configure.morgan-motor.com/plussix