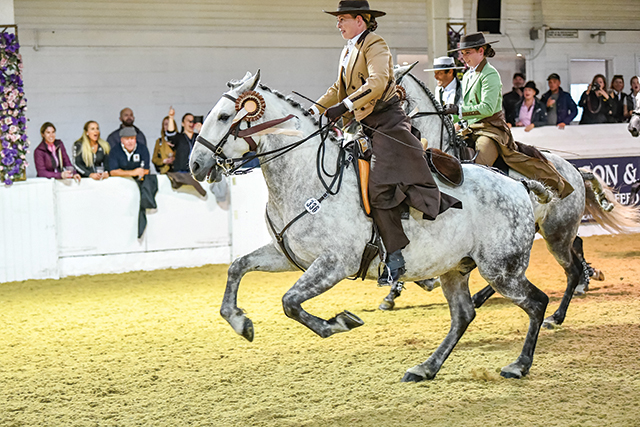 A taste of Portugal came to the heart of England this summer when, for the first time, Portuguese Lusitano horses from all over the country spent three days competing at Arena UK near Grantham.
Portuguese music, food and wine, as well as Portuguese horses, were enjoyed at the annual Lusitano Breed Show, organised by the Lusitano Breed Society of Great Britain, 14th–16th June.

The Show featured performances with the Garrocha, a long wooden or bamboo pole widely used to herd livestock on farms in Spain and Portugal, where they are carried by highly skilled riders whose manoeuvres have been handed down from father to son over many generations. When set to music, the movements used daily in the fields by the Spanish Vaqueros and the Portuguese Campinos become a mesmerising dance between horse and rider. Friday evening featured a Garrocha display by a leading British exponent of the art, Richard Chamberlin from Hampshire, riding a former racehorse, Maraagel, whose jockeys included Frankie Dettori and Willie Carson – showing that any breed of horse can be trained in this discipline. Richard gave Garrocha lessons to show competitors on Friday afternoon.

Saturday evening saw the fast and furious exciting speed final of a sport which tests the skills required of horse and rider when working with livestock. The country’s top international working equitation rider, Holly Barber of Pine Lodge School of Classical Equitation in Norwich, competed. She and the other advanced riders negotiated a complex obstacle course against the clock with only one hand on the reins. One obstacle is a black wooden bull with a small rubber ring on one horn. Riders take a Garrocha out of a barrel then holding it like a lance, gallop past the bull, spearing the ring with the end of the Garrocha and returning it to the barrel without dropping the ring.

Holly has competed in World and European Working Equitation Championships since she made her international debut with the GB team as a junior fourteen years ago. Last year she and her 10-year-old Lusitano Exparta d’Atela were 6th in the individual Working Equitation World Championships in Germany, helping team GB finish in 5th place, and she was individual silver medallist and team GB bronze medallist at a recent international contest in France, where she beat the World Champion to win the speed section.

They also compete internationally in a second discipline. Last year Holly and Exparta won a team silver medal at a European Dressage Championship. Other members of the GB team will be in Grantham aiming to qualify for this year’s Masters du Cheval Ibérique European Dressage Championship in Paris, when Lusitano and Spanish horses from all over Europe will compete for team and individual medals.

The Saturday Gala Evening recreated the atmosphere of the famous Golegã Horse Fair in Portugal. There was a Grand Parade where riders, mainly in traditional riding costumes and their horses wearing elaborate saddles and bridles, show off their best movements and party tricks to catch the eye of a panel of judges who had seven trophies to award. Whilst Portuguese and Spanish music plays in the background, Grand Prix dressage horses demonstrated the pirouettes and piaffes seen in the Olympic dressage arena. Others bowed to the judges or showed how high they can lift their legs in the Spanish Walk.

Patrick Kempe travelled from the New Forest with his 19-year-old Lusitano Tetuã who re-enacted the Native American Indian story of the ‘Battle of Wriggly Snake’. The pair have a very special bond and enjoy giving charity displays, playing football, jumping and parading at Royal Windsor Horse Show and the London New Year’s Day Parade. Tetuã has appeared on TV, in newspapers, on a book cover and launched a charity deck chair collection in Hyde Park.

Another obstacle course was negotiated on four legs and four wheels, as Berkshire carriage driver Sara Dias-Ayton demonstrated the driving trials she successfully competes in with her home-bred Lusitano mare Bailarina.

The evening ended with a party featuring live music, Portuguese wine tasting and snacks. Portuguese and Spanish dishes were also available at the Arena UK café and bar menu on the Saturday.

As well as Lusitanos, there were competitions over the three days for Spanish horses, Friesians from Holland and the Lipizzaners made famous by the Spanish Riding School of Vienna. The judges included internationally approved judges who travelled from Portugal and Spain for the show.