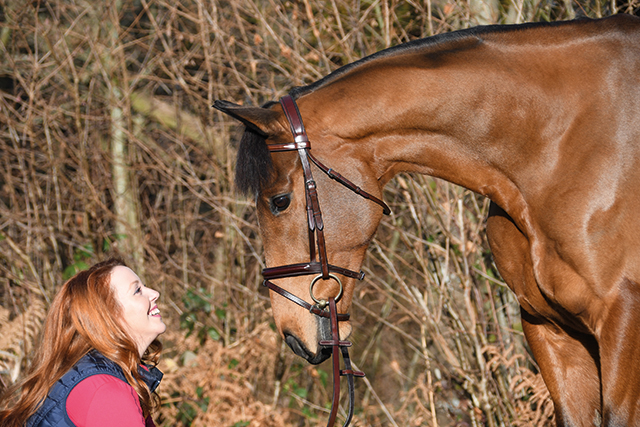 Diary of a Wimpy Eventer

Lincolnshire rider Victoria Brant has inspired many readers and fellow eventers through her personal blog turned book series, which documents her efforts to regain her confidence in the saddle.
A self-styled Bridget Jones of the equestrian world, Lincolnshire rider Victoria Brant began documenting her struggles to get back in the saddle after losing her confidence and is delighted her blog and books are now inspiring others to overcome their own fears.

Born in Boston and raised in Blankney, Victoria competes regularly at British Eventing events with her 11-year-old Irish thoroughbred Pat – this year qualifying for the Blenheim International Horse Trials.

The pairing also secured a regional final qualification for the prestigious Badminton Horse Trials 2018, but sadly missed out on a coveted spot at the Gloucestershire event.

But it hasn’t all been plain-sailing – just a few of years ago Victoria (31) completely lost her confidence and was too scared to even ride her beloved horse.

On a whim she began a blog – Diary of a Wimpy Eventer – last September as a way to share her fears and anxieties with like-minded people and her refreshing honesty and humour quickly attracted an army of followers.

This in turn has led to the publication of the first book in the Wimpy Trilogy. How to Get Your Leg Over was released in May to national acclaim and will be followed up by a second instalment – How to Stay on Top – in December.

“I was at absolute rock bottom in confidence,” recalls Victoria, who now lives just outside Lincoln.

“I was too scared to ride my horse, failing miserably at being a wife and losing momentum with life in general. The thought process was more to occupy my brain than to start something monumental, but it was there.”

“Another reason I wanted to write was to avoid becoming a wife that constantly whined about everything equestrian to a husband that didn’t really understand – the money and time I spent on my horse was making me feel an enormous sense of guilt and I wanted to vent to people that felt the same or at least ones that might sympathise.

“I got back on the horse and documented my ‘one step forward, six steps back journey’ with absolutely no filter – I held nothing back, and by Christmas I had 800 followers.

“I can’t explain what happened after that – it was like a steam roller. My following has grown massively, but the real deal for me is how much ability and influence I have to help others.

“I know where I came from mentally to achieve this, and I know I can make it work for other people too.”

Victoria, who grew up on a farming estate in Blankney, fell in love with horses and ponies after first sitting on one when she was seven, shortly after which she began lessons at a local riding school.

Her passion continued into her teenage years when she helped out with hunt horses at a local hunt yard, where she progressed to working as a cover groom.

After completing a marketing degree Victoria took on various office roles but her real passion was with horses and she went on to run various yards from dressage to polo and everything in between.

At 24 she was finally earning enough money to buy her own horse – but believes it was no longer riding for others and having the pressure to get everything perfect for herself which culminated in her losing her nerve and the desire to ride.

After launching her blog to vent her frustrations Victoria joined British Eventing and eventually started documenting her competitive journey online, which also brought in a new raft of followers.

“The support I receive before, during and after each show soothes my nerves to an extent.

“Without the backing and promises I had made to everybody on the page, I would have been withdrawing at every event. Instead we went out to each one and I rode for my life,” says Victoria, who also runs her own marketing consultancy.

“I placed in my very first affiliated event and then had three more placings at BE90 events. I just couldn’t believe it – I was genuinely shocked and humbled by what I was achieving after being so downtrodden for so many years.

“Some riders spend years working towards these goals; I just couldn’t believe what was happening.”

In February a few of Victoria’s followers suggested she turn her blog into a book as a way of documenting her journey and she decided to go for it – self-publishing from start to finish.

“Everything in the first book is straight from the depths of my soul, I’ve poured my feelings into this first book – and thank goodness they have been so well received!” adds Victoria.

“How to Get Your Leg Over has been the best experience of my life – I self-published it completely; I’ll never forget the feeling of holding my book in my hand, in fact I was in awe of what I’d created.”

How to Get Your Leg Over sold more than 2,500 copies in May and June alone and is available from Victoria’s website and Amazon.

It won book of the month in Horse Magazine and has also helped Victoria land a monthly column in a national equestrian magazine. She also won a competition to win a place on the Blue Chip All-star Academy TV show, which aired in five hour-long episodes on Horse and Country TV earlier this year.

As for the future, Victoria is keen to continue with both her writing and riding journeys – with more blogging and a third book to come, she is also hoping to realise her Badminton dream in the not too distant future.

“Who knew what the last six months would bring – I couldn’t have predicted half of it, but I have worked so hard for it and it hasn’t always been a good ride,” says Victoria.

“But it was so worth it – the feedback I’ve had has been amazing and if I can encourage and inspire others then all the better. My advice is to push your limits – break that monotony and you will be able to grab the tails of your dreams I can assure you.

“I have, and I really am just very ordinary.”

*To find out more, follow Victoria’s blog and buy copies of her book visit www.wimpyeventer.com