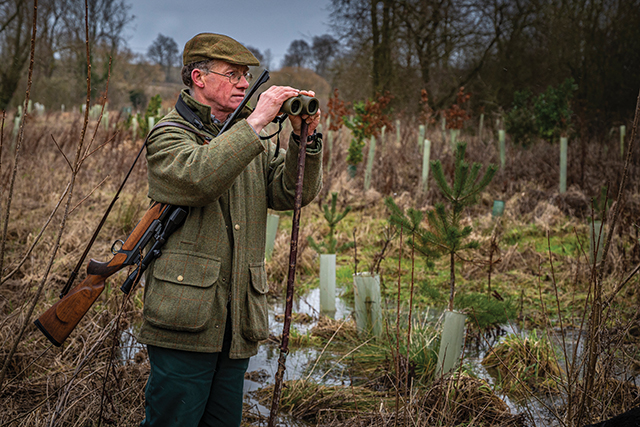 Do we have a deer problem?

Matt Limb OBE looks at the ever-growing deer population in the British Isles and across Lincolnshire, and the challenges of keeping numbers under control.

I grew up in a remote location, a farmhouse with my parents who farmed all their working life. At times in my formative years, I disliked the isolation, but at other times I fully appreciated the fact you were in the countryside. Spending time in that environment I was in regular contact with the local wildlife and species of flora and fauna, but one rarely seen was the local deer population.

They were certainly there, the hoof prints in the damp mud would be pointed out by my father, but to see one was a rare event, as in once or twice a year, making it a real topic of conversation around the dinner table that evening.

I can clearly remember a winter’s morning when I was no more than eight years old, out beating on a local shoot and working my way through thick, overgrown mature woodland. I emerged into a clearing at the same instant the gamekeeper appeared, asking if I was alright. At that moment a magnificent huge stag with a fine set of antlers walked between us slowly and gracefully, paused a moment, looked back, then disappeared never to be seen again. It was delightful to see and became the talking point over lunch, add to which the gamekeeper mentioned it countless times when we were together over the following years. The moral of the story was simple: despite living and spending so much time in the countryside, you did not see that many deer.

Now move forward a few decades and into a new century, it is almost the complete opposite. It is a rare day when I do not see deer when I am out with the dogs, plus sadly the number of deer you see on the side of the road hit by traffic is ever increasing. This massive change is hard to grasp and I can fully believe a line I recently picked up, that there are likely to be more deer today in the UK than at any time since the Norman Conquest, over a thousand years ago, with their numbers still increasing.

But should we be surprised at this increase? A look at policy in the past 40 years has prompted the planting and maintenance of acre after acre of new woodlands, which is still ongoing, plus mile after mile of new hedgerows and the conservation projects in the farmers’ field margins. From the deer’s perspective, it is a new housing estate purpose-built, even the hedges have given them the avenues to travel from one woodland to the next. So, it is hardly surprising that the deer population has benefitted, with numbers exploding in recent years. The small boar-like muntjac deer, found in only a few remote and isolated pockets in the early 1970s, has seen a colossal increase in numbers as it spread across the country and no other species in Britain has seen such growth in numbers over that time.

I am sure I am not alone in enjoying sitting and watching a herd, or even just an odd deer. But with the ever-increasing numbers comes problems. A growing herd of wild grazing animals will impinge on other species, as well as the wider countryside, plus farming, and put at risk the many conservation projects currently underway.

But is the growing number in our deer population already causing major issues? It has been reported that deer could now be involved in over 70,000 road traffic accidents on Britain’s roads every year, with the estimated cost of vehicle repairs being as much as a million pounds each month; the accidents are resulting in the death of some 45,000 deer and as many as 400 people injured. Far more disturbing is the fact that around 20 people are killed every year in road traffic accidents involving deer – almost one every other week.

Sadly, Lincolnshire is also suffering from this growing deer problem. I sat and chatted this over with an old friend. Richard, who lives in the south of the country, has had a love and passion for the countryside all his life and commented to me some time ago about the ever-increasing number of deer and admits that numbers show no indication of reducing. For over four decades, Richard has helped with deer numbers, culling deer for his freezer or the local game dealer, but he never looked upon himself as a deerstalker. This is about supporting the control of deer numbers for conservation and helping farmers. But recently, for the first time, farmers have asked Richard to cull more deer, following the ever-growing damage to crops, plus the visible rise in numbers.

To be effective and get close enough for a safe and clean shot, Richard will be out at either first or last light; at this time of day the deer gather on the edge of the woods, before dispersing during daylight. I sat with him recently at last light to witness a herd of some 50 or more fallow deer coming out of woodlands into a small paddock. It was without a doubt the most deer I have seen in one place and it firmly brought home to me the growing problem we have, especially when you consider each mature fallow buck can eat five kilograms every day. As the light faded Richard pointed out the older bucks and hinds. For him another recce was done and a safe spot to return to in the future. But he did confess he would prefer to go out before dawn allowing the day to get lighter; reminding me that dragging a fully grown fallow deer, that can weigh as much as 75 kilograms, across a field to his waiting truck can be hard work, especially in the dark.

One point Richard highlighted is that virtually every deer he has culled over the years has gone into the food chain. “People can be funny about venison, people appear to enjoy eating it when in a restaurant, but the majority are less likely to buy it to eat at home,” he said.

This has been underlined in the past year with the coronavirus lockdown, as far less venison has been required in the restaurant trade and the market for venison has slumped. Thankfully, Richard has several outlets for venison, most for the freezers of those who have learnt the value and quality of eating venison.

As we walked back across the meadow with the last of the deer disappearing, Richard spoke of the damage deer had done locally to tree saplings. Less than 24 hours after planting, deer started eating and uprooting or simply trampling the young trees. Yet this is the very type of conservation project we are encouraged to undertake. Sadly, they are also the very same projects that have caused the population explosion in deer numbers. As Richard agreed, continued management, including culling, will be inevitable and essential for the foreseeable future.

It is worth remembering that in a natural environment that is balanced, very few animals die of old age, they all sit in the food chain. Today our deer have no predators, less man and his motor vehicle, so it comes as no surprise that numbers are continually on the up, especially when we take into consideration the recent changes in conservation, which are all in the deer’s favour.

People like Richard appear to be on the frontline of the growing deer issue we face. It is a matter of sensible management and culling as required, the result of which is in the human food chain in a matter of hours. Like so many, I have great respect for the deer that roam our countryside and fully appreciate what they can bring and add to the rich tapestry of our rural environment; but like so many things in life that beauty is a perilous balance, which needs to be managed and maintained.