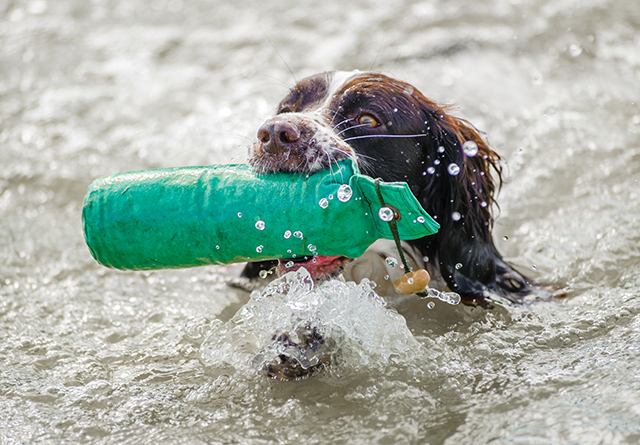 Don’t kill them with kindness

Matt Limb OBE shares a timely reminder about keeping dogs healthy after a quiet shooting season, when the pounds can soon start packing on.

As the days get longer, the nights get lighter and with the clocks changed, most of us are looking forward – now with more hope and confidence – to a summer when we can again get out and enjoy our countryside.

The last shooting season, described to me recently as the season that never really was, feels like a long time ago and a near distant memory. Like so many, the thing I missed most was the company of like-minded people and of course, getting out with the dogs and watching them working, which I did manage despite the restrictions and lockdowns; one highly memorable walked up day being when I hit a left and right partridge and then watched the two spaniels retrieve them together. But my number of days out was certainly down compared to previous seasons.

The lack of shooting and its full after-effects may not be known for some time – will shoots survive economically through this spring and summer to have an opening day in the coming autumn and a full season’s shooting? So, while we wait and hope, in some regions the effects of last season can already be seen and felt. One that I had not thought about much, but has caught my eye these last few days, is the effect on my dogs.

As many of you know, I have been an English Springer Spaniel fan all my life and it has been quoted more than once that I have spaniel blood running in my veins. As a breed, the Springer is a busy little dog and never backward at coming forward when it comes to their food. Of all the Springers I have had over the years, I can only remember one that was anything like a fussy eater; she did not like carrots, in fact, anything red would be left in her dish. Given that dogs have a limited vision of colour – seeing things in shades of green and yellow – I find this astonishing, but all the others would, and still do, wolf their food down every night.

After a typical shooting season, the dogs will lose some weight and by the time the season ends in early February, they are ready for a rest. But not this season. In February they still held much of their weight, as they had simply not been out as many days. Then I noticed a report from the Royal Veterinary College – a highly respected and long-established independent veterinary school which is rated as one of the top veterinary schools in the world – saying that there was an epidemic of overweight dogs in the UK.

Normally I would not have been especially surprised at such a headline; chats with several vets over the years have often been about the issues arising in dogs that are overweight. But what caught my eye in this report was the breeds listed as showing an increased risk of overweight status. These included some highly popular working gundogs: the English Springer Spaniel, the Cocker Spaniel and the Labrador Retriever. I cannot see in the report any breakdown between working strains and dogs more likely to be used for shows, but it certainly started me thinking that my busy working Springers, as a breed, are now listed as being at increased risk.

The study was not a swift or random sample: it included over 22,000 dogs who were followed for over a year, after which it emerged that over 1,500 dogs were recorded as being overweight – that is over seven per cent. The study also highlighted that dogs who were neutered and middle-aged were additionally associated with increased chances of being overweight. But being overweight is just the tip of the iceberg. As we know from our own bodies, being overweight, or even carrying just a few extra pounds, can be linked to many other ailments, some more serious than others. Controlling our weight is good for our general health. The same applies to our dogs.

As any responsible dog owner will know, obesity carries severe health risks for our best friend. Overweight dogs have a shortened lifespan and a reduced quality of life, plus an increased risk of arthritis, breathing problems, heart disease, diabetes and certain types of cancer. As Dr Dan O’Neill, a senior lecturer at the Royal Veterinary College, plus co-author of the report said: ‘To defeat your enemy, you need to know your enemy. Obesity is the enemy of the health of our dogs. This new study identifies the breeds and ages of dogs that are most susceptible to obesity and we can use this information to defeat obesity.’

The report offered a timely reminder to check on my dogs, especially as they have not been that active during this past winter and can be seen to have held onto a little weight that would normally have been lost. The worrying part is that your dog putting on a few extra pounds can so easily go unnoticed and sadly the damage has started before you realise it.

It does not take a lot to check if your dog is overweight, and here I do mean overweight and not obese. But check their weight against what?

There is no doubt that putting your dog on the scales – or as we do at home, pick them up while on the bathroom scales then do the maths – is a quick and easy way to see if they are overweight, but you need to compare that weight against a regular regime of weighing and recording the dog’s weight to establish a trend, which takes time to establish.

More common (and giving a faster indication) is to simply look at the dog. Feel for their ribs while they are standing on all four legs and simply run your fingers along them – you should be able to count the ribs easily; if not, the dog could be carrying too much weight. Now repeat this process but feeling the spine – once again you should be able to feel the length of it easily. If you struggle to do so, the dog may be carrying a little too much weight. Finally, you should be able to see a nice clear and noticeable tuck in at the belly, both from the side and when looking down from above the dog. It is a simple and non-scientific test, but it has stood me in good stead over the years and was highlighted to me by an old vet who visited the farm for many years as I was growing up. But I would add that if you have any doubts or concerns, get the dog to the vet with some haste. Like so many key workers, vets and their nursing staff have done a magnificent job over the last year of lockdown.

We have a legal duty toward the welfare and care of our dogs, day after day. I know well the temptation to give them the end of a sandwich when out with them for the day, or to spoil them with a treat – but are you doing them a favour if it results in weight gain and their eventual poor health? It is a well-known saying that a dog is for life, but they never seem to live as long as we would hope – but with some sensible feeding and exercise you can make those years enjoyable, for your dog and yourself.