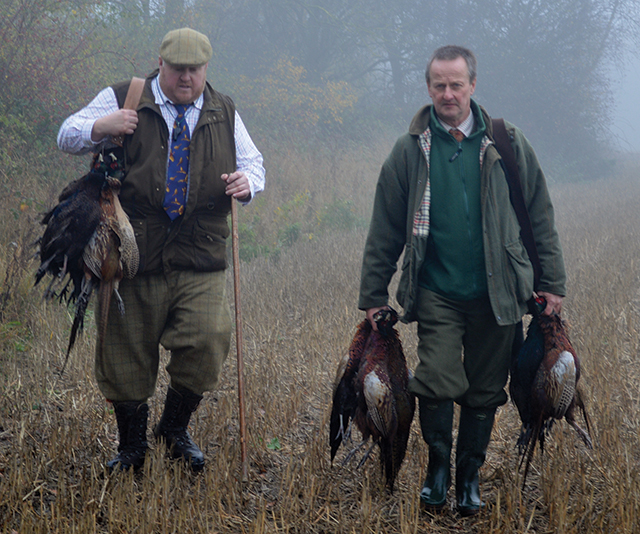 This is the last of my shoot reports for this season, I do hope you have enjoyed the brief reviews about some of the wonderful shooting we have in our county. This shoot is only a short drive from Lincoln and is enjoying a renaissance after having collapsed last season.
The shoot is Eagle Hall and it has been taken on by Jonathan Airey. With the assistance of the existing gamekeeper Wayne Pryer, Jonathan (36) from North Lincolnshire has resurrected this once fine shoot. Wayne had stayed on at the invitation of the estate at the end of last season as they recognised his diligence and hard work ethic was a definite asset. When Jonathan took over the shoot, he was able to call on the immediate skills of the man on the ground with five seasons’ knowledge of the estate and the shooting. Together Jonathan and Wayne have set about rebuilding what has been recognised by so many visiting guns over many years as a great shoot with a great future.

On the day of my visit on a foggy day in early November the first thing that struck me as I drove down the lane to the shoot lodge was the relatively modest field sizes, with high hedges interspersed with trees, ideal for showing partridges over.

The blanket of fog reduced visibility, which delayed things a little, so I took the opportunity to ask Jonathan how things were going. He explained: “I did not take over until February 2015 so time was at a premium and there was no time to lose. Our plan included constructing four new release pens for pheasants, so 900 posts were ordered along with 5,000 metres of wire netting, 70 pop hole grids, 70 drinkers, 1,400 metres of water pipe, 5km of electric fence wire and posts, a quad bike, trailers, spinner, power tools and all the other bits and pieces that are needed in the building of a shoot.”

In addition there were forty acres of game cover to be planted. The pens had been completed with over 800 posts having been knocked in by hand. This Herculean task has been done singlehandedly by Wayne and two part-time helpers. Wayne (51) has been a keeper all his life and learned his trade at such prestigious shoots as Longleat and Lea Manor in Shropshire. He was the first ever person to complete an NVQ in gamekeeping at Kingston Maurwood College in Dorset, after starting a YTS programme in 1988. Now with twenty-seven years’ experience behind him and five years on the shoot he is well equipped to take Eagle Hall Shooting forward into the twenty-first century.

Wayne is ably assisted by his wife of twenty-one years, Cheryl, whose reputation as a shoot hostess is already a bit legendary to those guns in the know. Her shoot lunches and afternoon baking in particular are much loved.

With the introductions over and the fog not looking like it was lifting, we took the decision to get started and climbed aboard the custom-built shoot trailer and set off for the first drive. This was a mix of both pheasants and partridges and despite the poor visibility a good number of birds were accounted for, getting the day off to a cracking start.

We completed another drive before stopping for a mid-morning break to enjoy the customary snacks and a tot of sloe gin to “straighten the eye” and keep the foggy chill at bay. We did one more drive before returning to the beautifully refurbished shoot room for lunch, where Cheryl had prepared pheasant pie with all the trimmings followed by apple pie – all washed down with a glass of wine.

Suitably replete, Jonathan had us on the move for a final drive, just a short distance away. We were able to walk directly to our pegs and accounted for some great partridges from a maize strip behind some trees – a fitting end to a great shooting day, despite the poor visibility that persisted. We can control a lot of what happens on a shoot day but not the weather. We finished with a total of just over 200 birds, a testament to the huge potential of this shoot.

Jonathan Airey’s plan is to put the Eagle Hall Shoot up there with the best, shooting partridges over high hedges and pheasants from traditional woodland. With 3,800 acres and thirty drives to call on, I have no doubt he has all the ingredients for success. It is very reasonably priced, so days filled fairly quickly, but if you would like to shoot there next season contact www.eaglehallshoot.co.uk or ring Jonathan on 07977 494420. You won’t be disappointed.