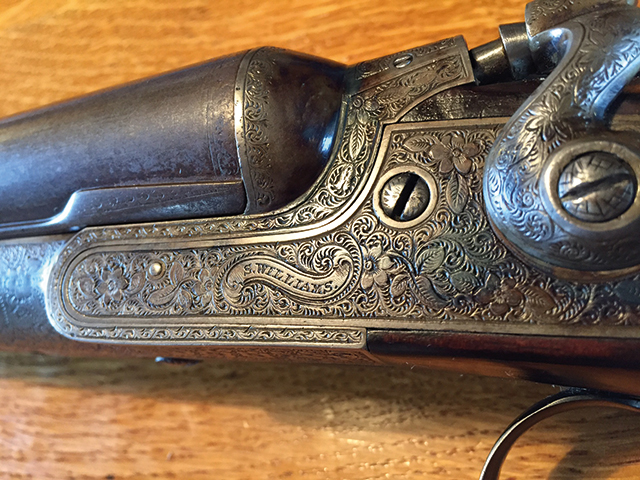 Following on from last month’s Enigma, the very rare Charles Lancaster was made for William Edmund Warren of Westhorpe Hall, Notts. This gentleman had only one arm, so to shoot he required small bore, short barrels and mini forends. As a Lieutenant he took part in the Indian Mutiny in 1857, where he lost his arm. When he left the army he had made Major General.

Has anyone heard of S Williams of Keighley? This double barrelled hammer gun No 3287 (see pic above) is of exceptional quality, made as Black Powder and reproofed in Birmingham in 1966 with 29¾-inch barrels. This gun had a Deeley and Edge patent forend catch and a very rare method of bolting the gun. Mr Purdey invented the double bolt around 1865, some others soldiered on!

In this instance John Thomas patented his solid self-locking vertical grip in 1870 which is present here; probably not a great success as I have not seen another. The gun is beautifully engraved with roses and leaves throughout, estimate £4–600.

Thomas Bradbury of 119 West Street, Sheffield (see pic below) produced here a gun for the Marsh. An 11 bore percussion single barrelled gun of 32”. It is engraved with various wildlife, four dogs, ducks and rabbits.

It has a solid silver escutcheon marked J H with No 724 marked below, a buffalo horn butt plate and silver cap on the pistol grip £3–500.