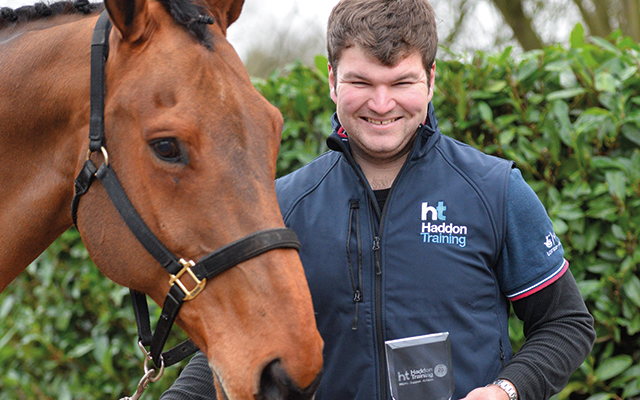 At the prestigious British Grooms Awards 2017, which was sponsored for the third consecutive year by Haddon Training, it was Lincolnshire based freelance groom David Burton who won one of the five categories up for grabs: The Haddon Training Team GBR Pony, Junior and Young Rider Grooms Award.
When asked how he felt on winning this award, ahead of so many all eager to win it, Dave laughed: “I’ve been waiting for the moment someone wants me to say something knowing full well I do not know how to put it into words. However, just grooming for the junior team was a huge honour and I must say a huge thanks to Debbie Carpenter and Shelly Gilbert for putting my name forward to Peter Milligan and Caroline Moor and then for them to invite me to groom in Millstreet.”

Having groomed at many big three-day events including Burghley, Bramham and Boekelo, Dave obviously knew what the job entailed, but admitted he still didn’t quite know what to expect when grooming for Holly Needham and Phoebe Locke at the Junior European Championships. From the moment he received the phone call, to travelling to Stoner to meet the team and then travelling out to Ireland in the horsebox with all six team horses on, Dave said it was not just exciting but knowing that he was doing this for his country was quite surreal.

“I was aware that I had been nominated for the award but knowing who else I was up against, I wasn’t sure I would be in the running,” said Dave. “I was actually out exercising three hunt horses when I got the email to say I had won, but I read it quickly and then had to re-read it and then again when I got back to the yard and couldn’t believe it. I had a great weekend in London collecting the award and how lovely it was to be with all the award winners to celebrate all the hard work everyone has put in.”

Chris Hewlett, managing director of Haddon Training presented the winning candidates in the five categories of the British Grooms Awards and commented: “Haddon Training supports many grooms, often the unsung and forgotten heroes and backbone of our industry. We are therefore honoured to recognise the outstanding contribution and achievements of a few.”

Dave Burton has worked hard to get to where he is today.

Speaking about his achievement, he said: “I am truly grateful to Haddon Training for sponsoring such an award. I haven’t had much to do with Haddon Training but a few of my clients use them to recruit apprentices and being a past working pupil myself, I know having ‘on the job’ training is so important and I advise anyone wishing to be a professional groom to go down this road. It may seem hard work and low pay to start with but there are amazing opportunities along the way and you get to meet and work with some lovely people and horses.”