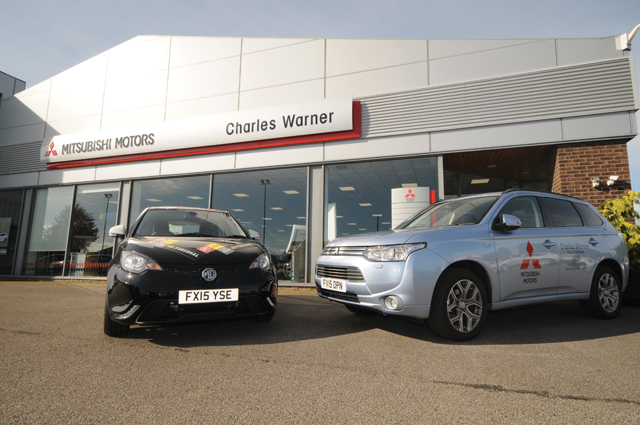 Charles Warner Mitsubishi have clearly been stamping their mark on the equine scene this year by promoting at the Lincolnshire Horse Trials as well as ensuring their vehicles have been seen at several equine events.
Charles Warner Mitsubishi have also given their support to the popular Norton Disney Horse Trials, with the water jump now becoming known as the Charles Warner Water Jump. The spring event at Norton Disney was the first time the dealership had been involved with the biannual event, which is now in its sixth year, but it won’t be the last.

Sales manager, Nigel Burley said: “Mitsubishi vehicles are ideal for people with horseboxes, so this was the perfect event for us to have a vehicle display at. It was very much an awareness exercise for us, linking our name with the equine world. We’d been advised to go and do it and we’re very glad that we did.”

Indeed, the company now has a strong presence at Norton Disney and are particularly excited for the much loved autumn event. Nigel Burley added: “The October Norton Disney Horse Trials is at a perfect time for us, with not just the launch of the series 5 L200 Double Cab Pick-up as being best in class in five categories, but also the October launch of the 2016 Outlander PHEV plugin hybrid with premium leather interiors.”

The Charles Warner Mitsubishi strategy is certainly clever and strong, with a long-term relationship being built with events such as Norton Disney, showing that they are here to stay. Charles Warner have always been a well-known and trusted family firm, where service and after sales support has made them stand out from the crowd. Now coupled with Mitsubishi, a tried and trusted brand that is a workhorse to many in the countryside, particularly the equestrian world, the future is looking good for the company.

The other part of the stable at Charles Warner is the iconic MG marque.